The peacock in Jaisalmer

The peacock in the center of the picture is came from
the royal palace of Udaipur in India.

The peacock and the landscape are drawn by separate.
First of all the peacock was drawn for the cover of the book
named “Sikisai-Hyakka”means the colors encyclopedia
by  (C) GEK KIKAKU CENTER INC.
The landscape  in the background was drawn several yeas after.
It is the desert of Jaisalmer in the west India near the border of Pakistan. 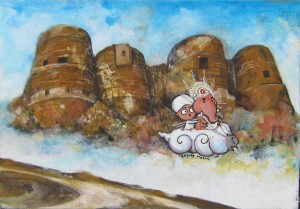 Achar-kun is a character who lives on the street in Kolkata India.

He is flying with Ganesa the Hindu god in fort city Jaisalmar.

The Empire of Lights 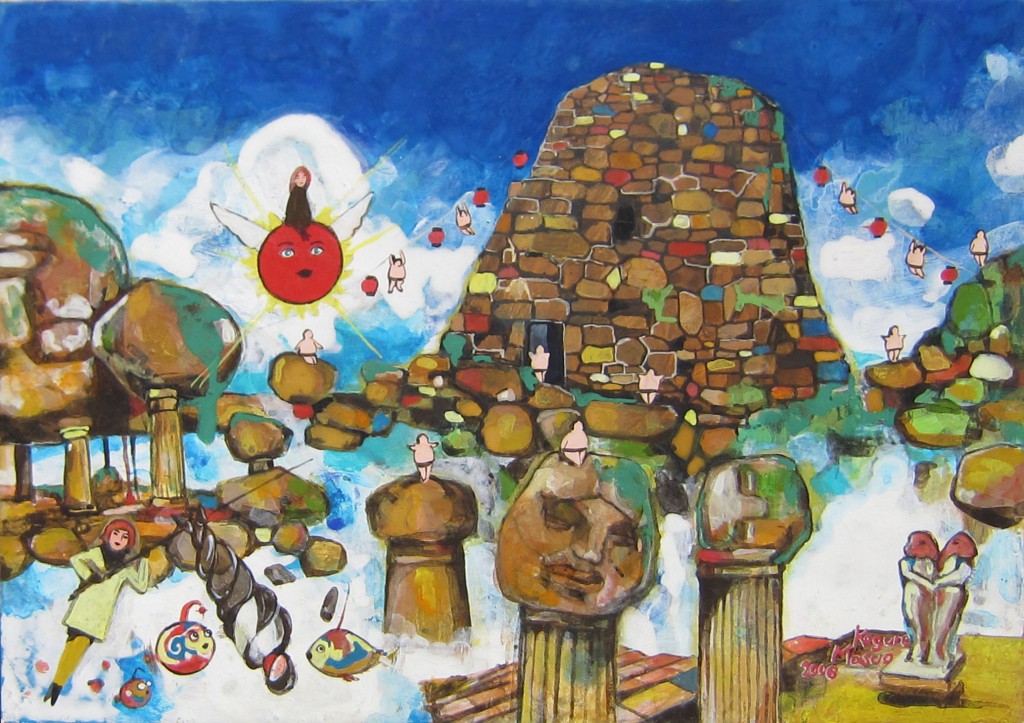 This picture takes a title from Rene Magritte like as “The extended family”.

Off cause it become deferent piece but it has remain of nuance from it.

It is imaged from “the Nuoro” ruin in Sardeinia Italy.

Anyway, this world has the brotherhood of “The room of Sumo Angels”.

This world is released from gravity, you would enjoy literally “The room of air floating” 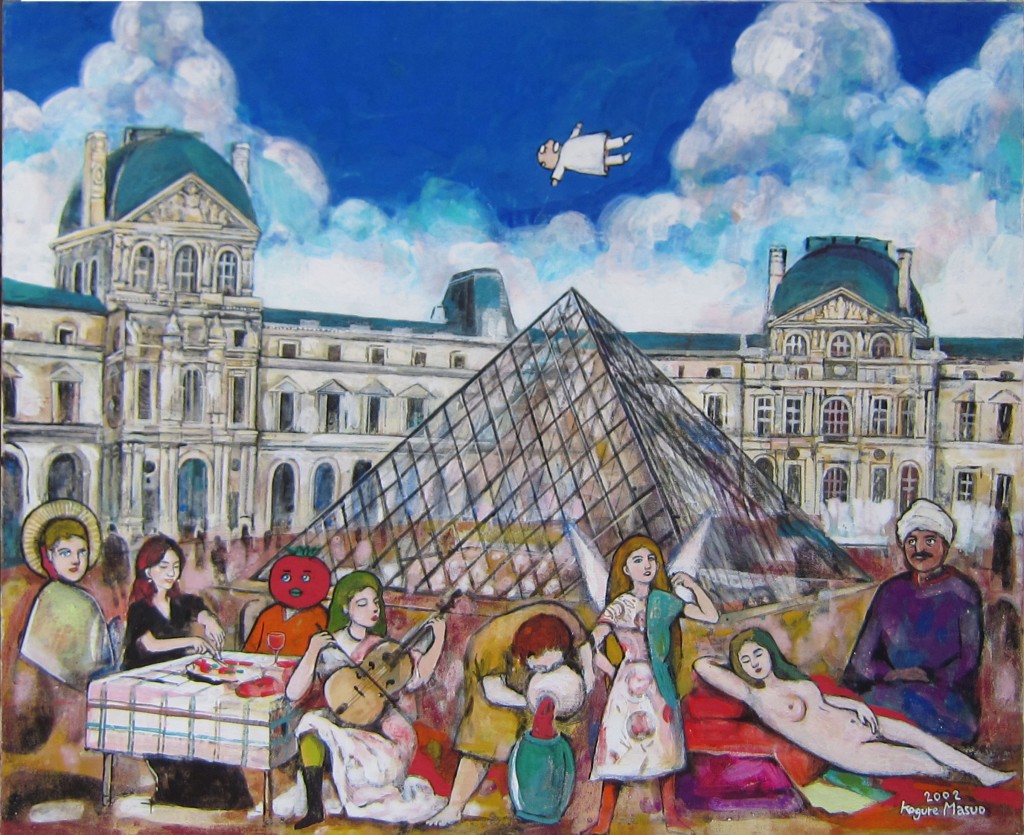 This picture is made by the cover of my work “Enjoy Louvre”.

People in the picture is posed as the collection works of Louvre.

My work “Uncle Siesta” is floating on Louvre, too. 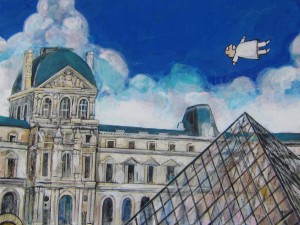 It will be finish and show in the exhibition in next December. 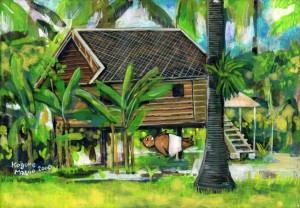 This is Uncle Siesta in Cambodia.

He has sun tang in strong sunshine.

Title has Angkor, but the house in background is
a  above-ground dwelling near by Angkor.

Enjoy the air in southern area!

The angels in Costa Smralda 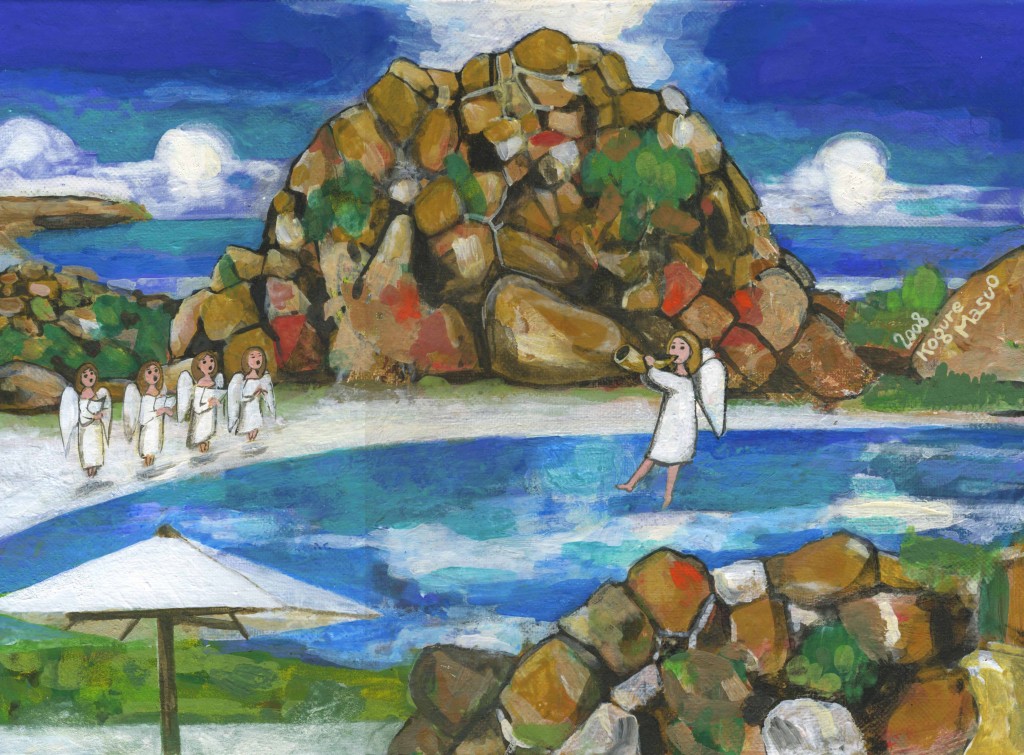 Costa Smeralda is the most famous resort place in Italy
where located in the north Sardeinia island.
People in Italiy really like this island
but historic say that coast in Sardinia no-one lives in
because there is always has be attacked enemys.
Because Sardinian original food is not sea food.
It is mountain village dish by hunters.
Five angels bless you by chorus and their horns.
Chandra and Suria / The palace of the wind 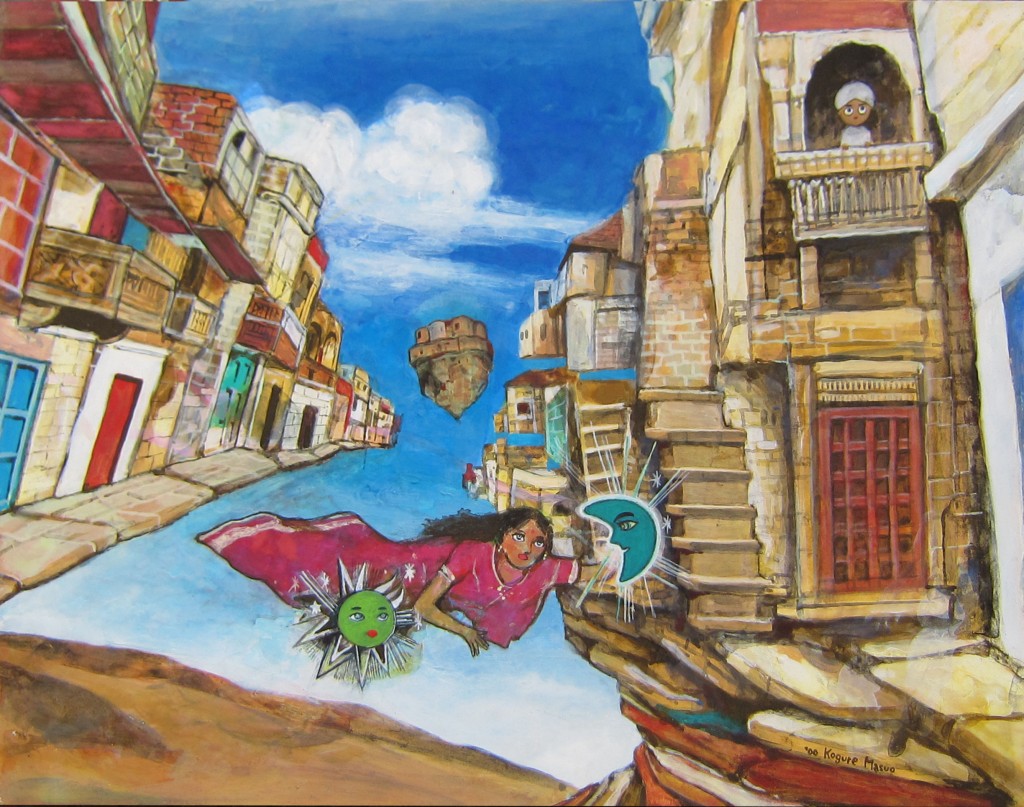 Chandra means the moon in Hindi.
Suria means the sun.
The city on the air came from same place as “The peacock in Jaisalmar”.
Jaisalmar is really beautiful city but some mad dogs in everywhere in the city,
I remember I really felt uncomfortable.
They say every wild dogs in India have rabies,
moreover it was the mating season!
But people of a spot never mind,
the grabbed the tail of the dogs was astonished us.
I thought it might be the air city because there is no wild dog .

Rahel and Raul / The palace of the wind 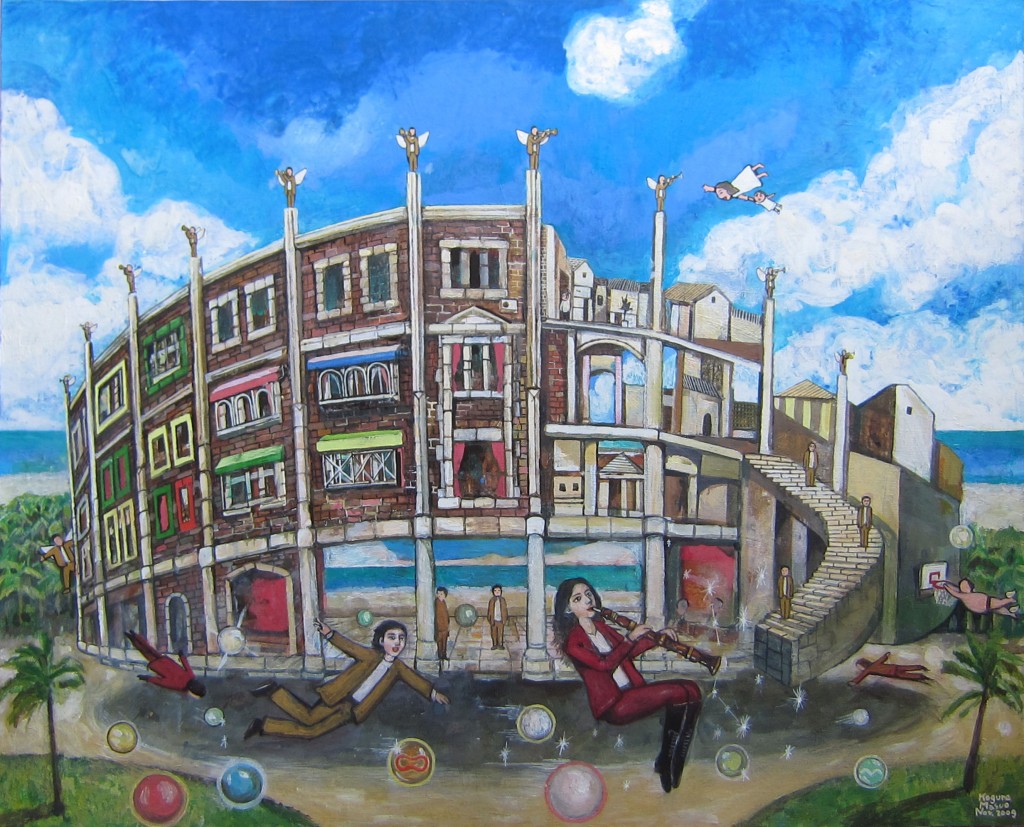 This is same “The palace of the wind”,
but it models from the building of the Shanghai settlement ages.

Rahel and Raul are mother and child floating one in the picture. 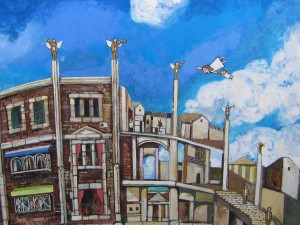 The houses under Rahel and Raul is south Italian style.

The balls and  Sumo Angels are elementary particle existence. 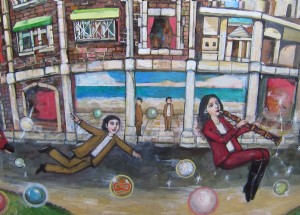 The sea in the picture came from the image of Hynan island in China
where located in the edge of the south.

Now Hynan island is the resort place
but in the past it was the place of panel colony.

There is no air conditional  ages, so it might be hard to live in there.

The sprits of Angkor / The palace of the wind 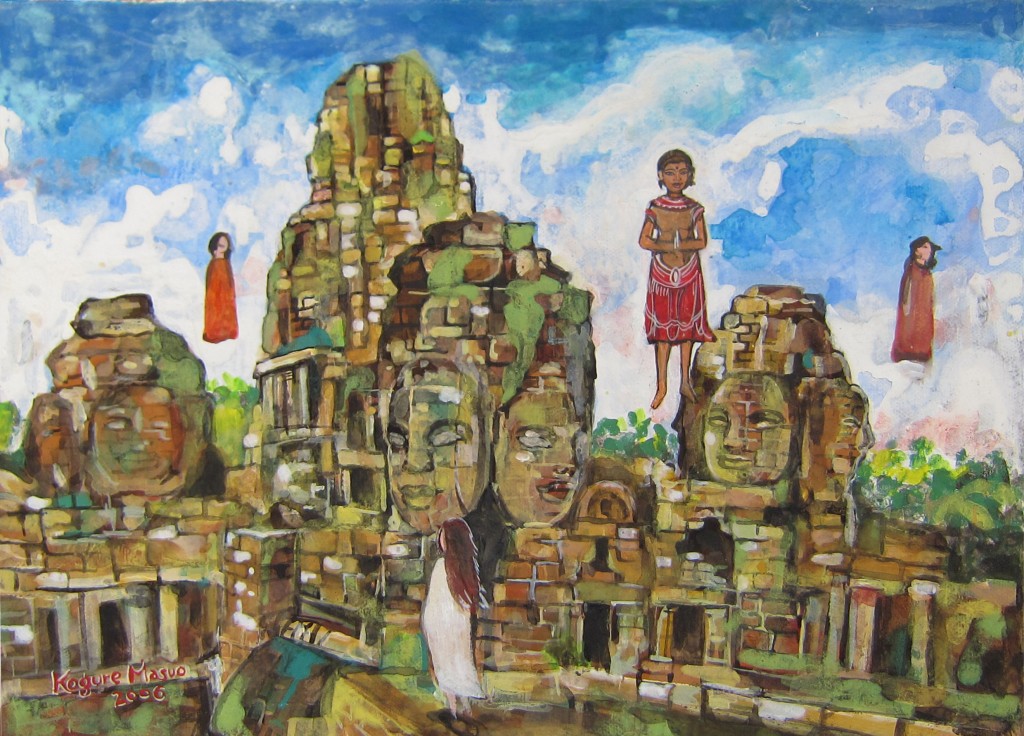 This room has three “The palace of the wind”.

The real ”The palace of the wind” is in Jaipul in west India Rajastan state,
but every pictures are different from real one.

This pictures comes from Angkor Tom in Cambodia.

Are they the ghost?

I don’t know about it.
But if they are the real ghost, they had a time to live to be human being.

I suppose they didn’t have such a time, because they are not ghost.

Benares is the biggest holy place of Hindu in India.
The picture is drawn holy Ganges river.
Once they born in Hindu, the happiest thing is pass away in this place.
I drew the place in my work “Achar-kun in India“,too.
If you hesitate to go to India,
I recommend my book and pictures! 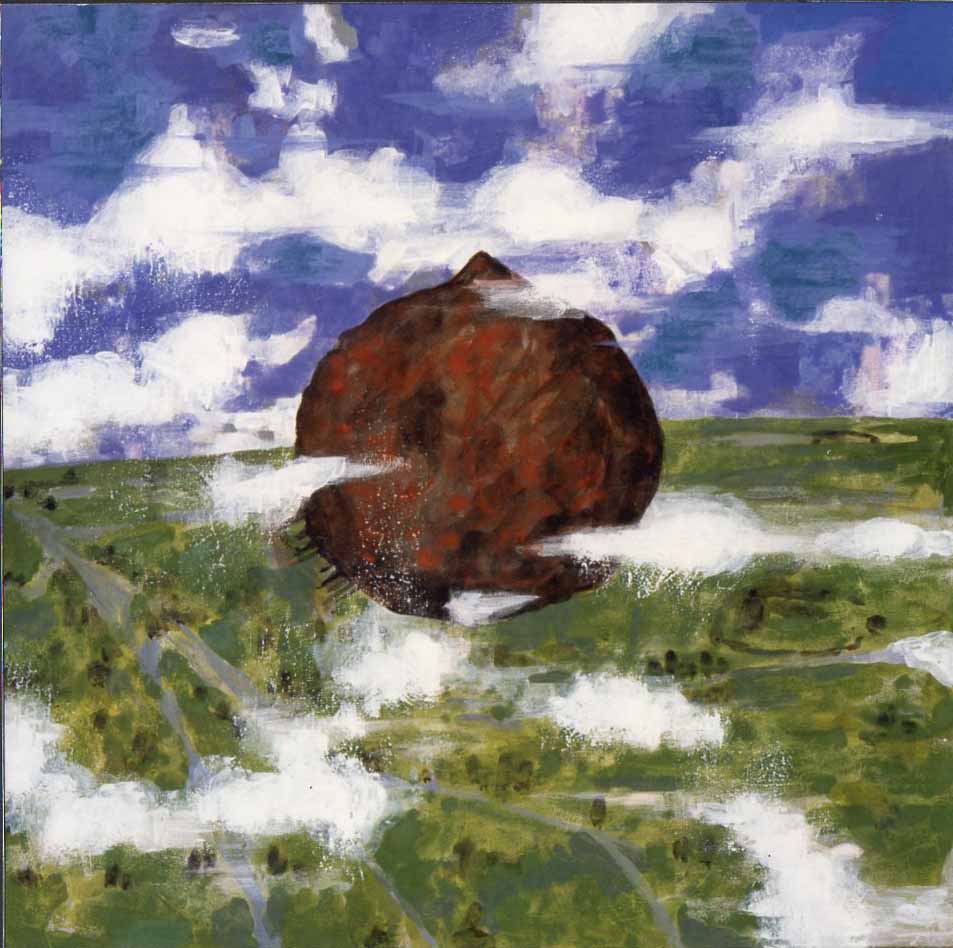 In Ramayana the Indian ancient epic,
hanuman the apis god active in the story!

When Price Rama’s brother Rakshmana has injury,
Hanuman goes to Mt. Kailsa in Himalaya  to looking for madison glasses.

But Hanuman couldn’t fined,
because he carried the mountains to Lanker island (Sir-Lanka).

The picture express it but you can’t see Hanuman there. 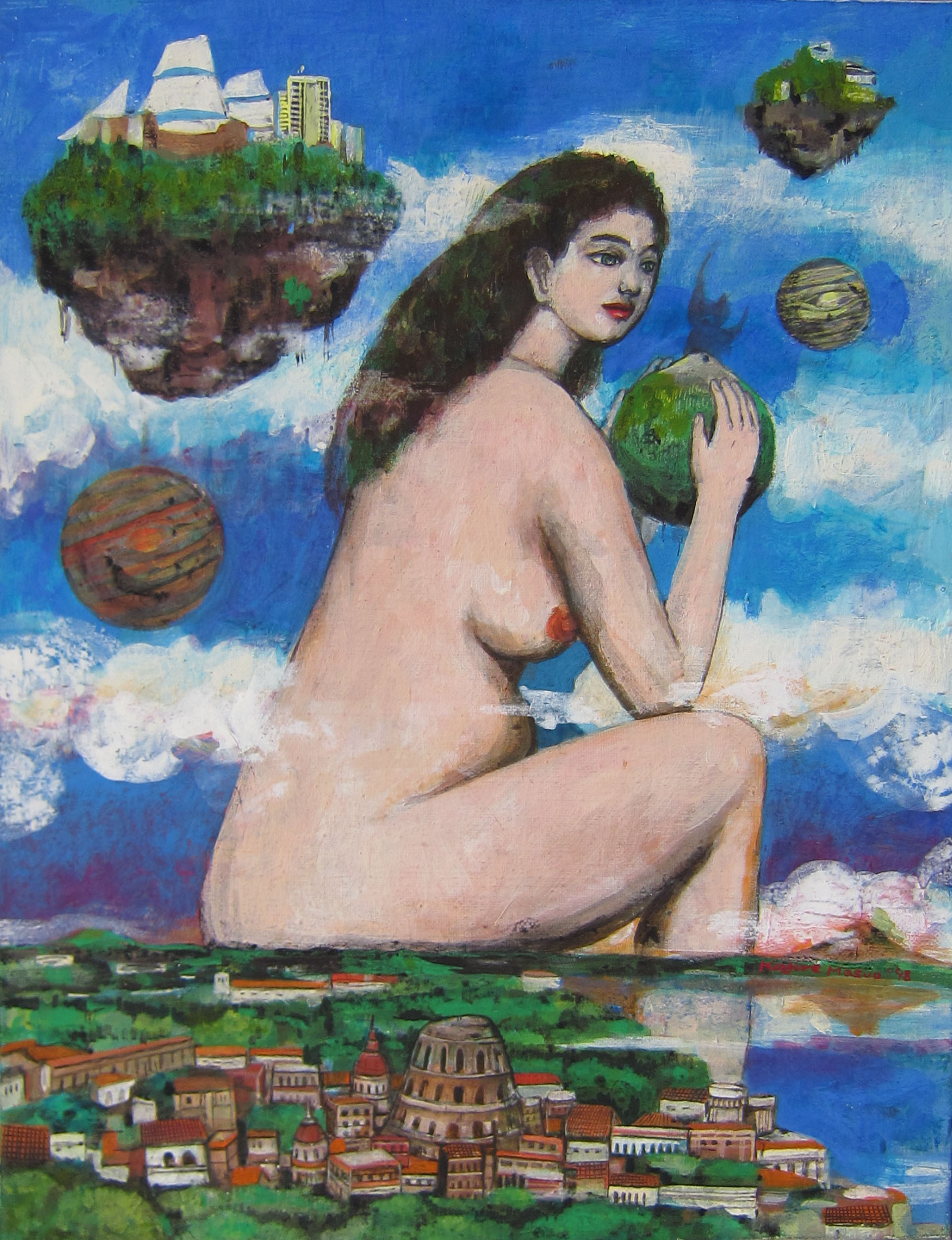 Goya’s “The giant” must be not Goya”s work I hear somewhere.
But, it has another series of monochrome drawing.

This picture was inspire from the drawing.

Giant is destructive, because it turned into giantess.
It must be more peacefully.

The angels in Mumbai
who passes through simultaneously two windows 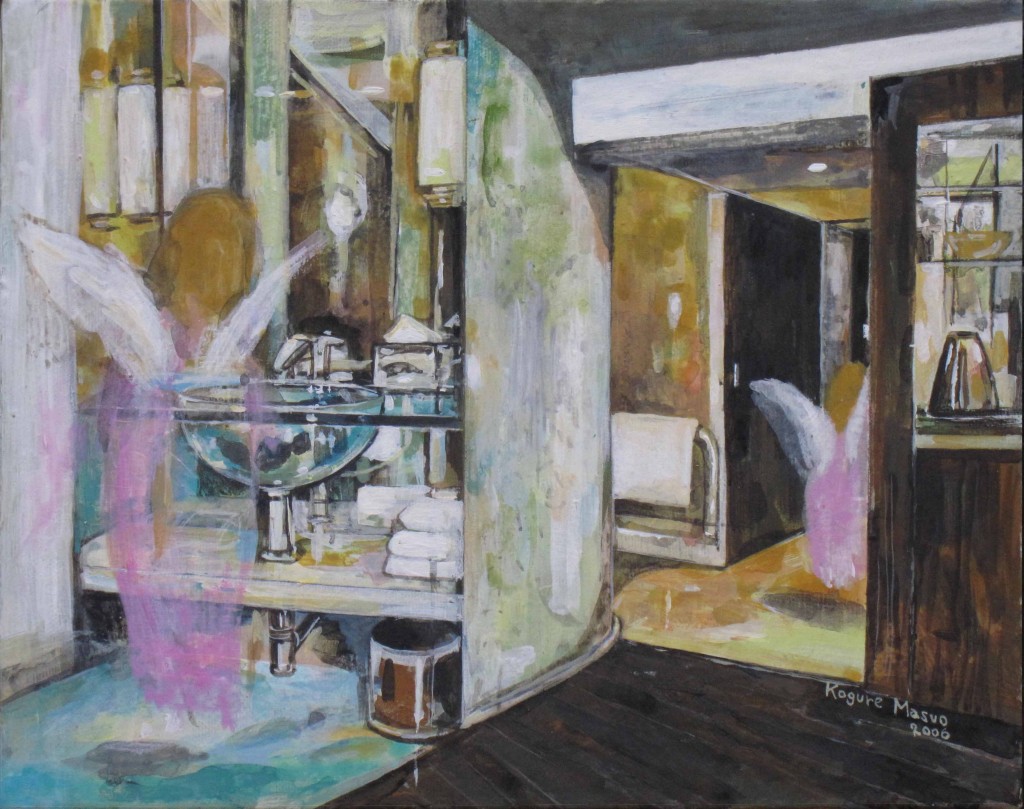 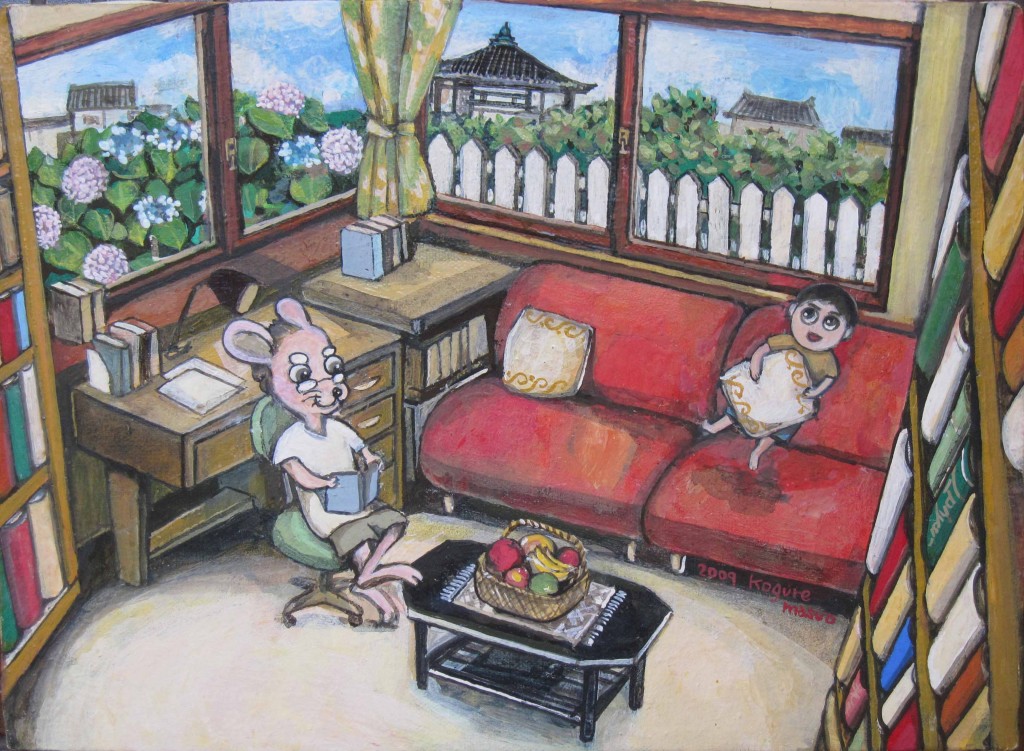 This piece is the memory of my father Kogure Yozo
who passed away in 7.Dec.2008.

Kogure Yozo was a physical scientist, I influent so much from him.
His last work is  the book of  collaboratin with me.

Eelementary particles are dancing in the room and his brain. 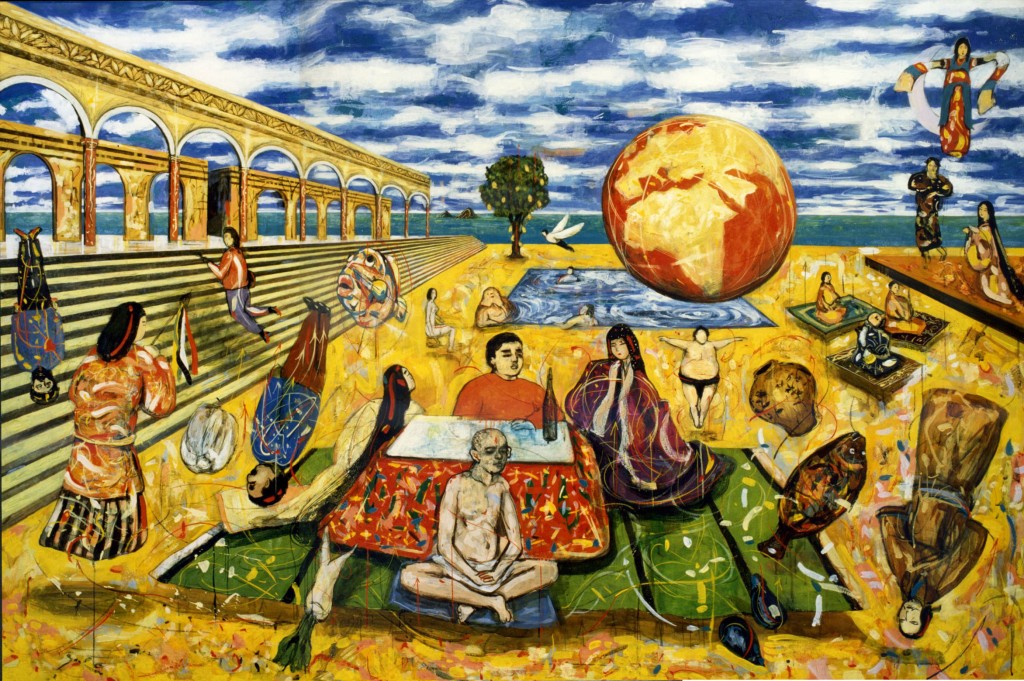 上海三十七階建遊覧車
(The 37 deckers bus in Shanghai) 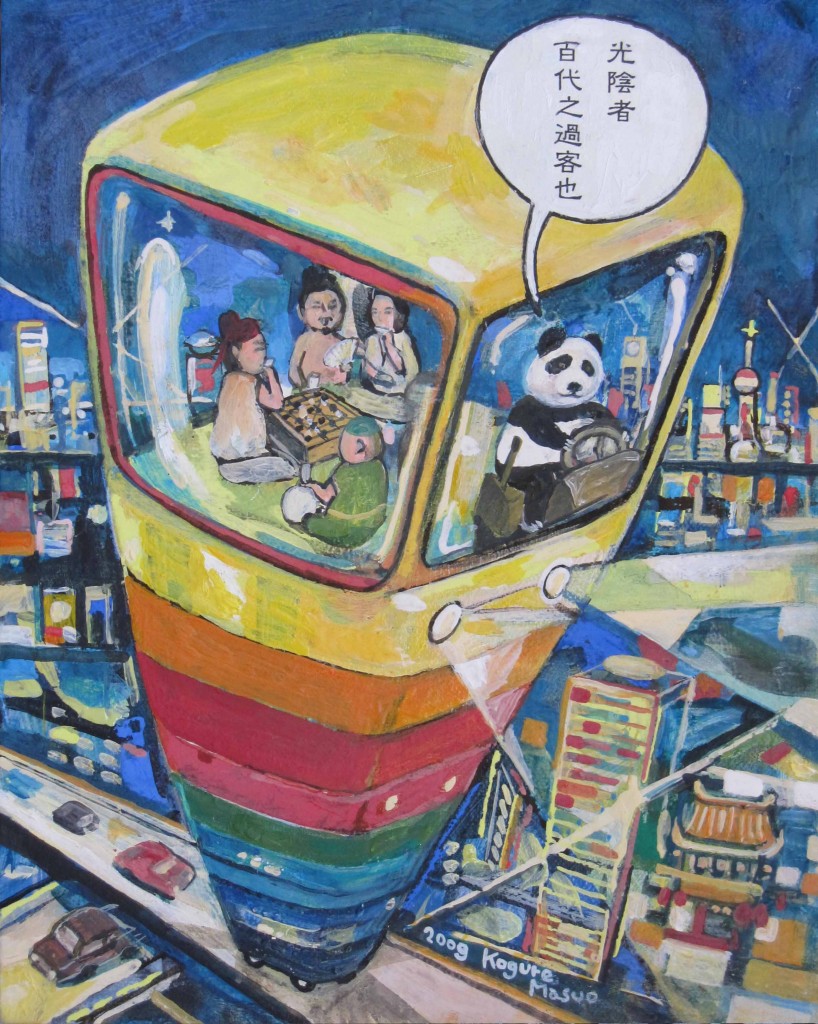 This picture is based on the dream when I saw in my student day.
Actually, it must be in “The room of Jung”,
but the dream is so foolish,so it bring this room.
The dream is like this,
I rade the 37 deckers bus and I wandered about Kabuki-cyo and Roppongi.
But the landscape of Tokyo is not suitable for the picture,
I changed to Shanghai, so driver turned into giant panda.
It needs more courages to bring the speech balloon in the oil painting.
But I remember 12 years ago one gallery owner recommend to do it.
The letters in the speech balloon is the part of the Lee-Pou’s poem.
Famous Japanese Hike poet Matsuo Basyo’s ” Okuno-hosomichi”‘s  first paragraph,
“The months and days are the travelers of eternity.
The years that come and go are also voyagers.”
is came from Lee-Pou’s poem.
But it is no relationship between the picture,it only chinese relation. 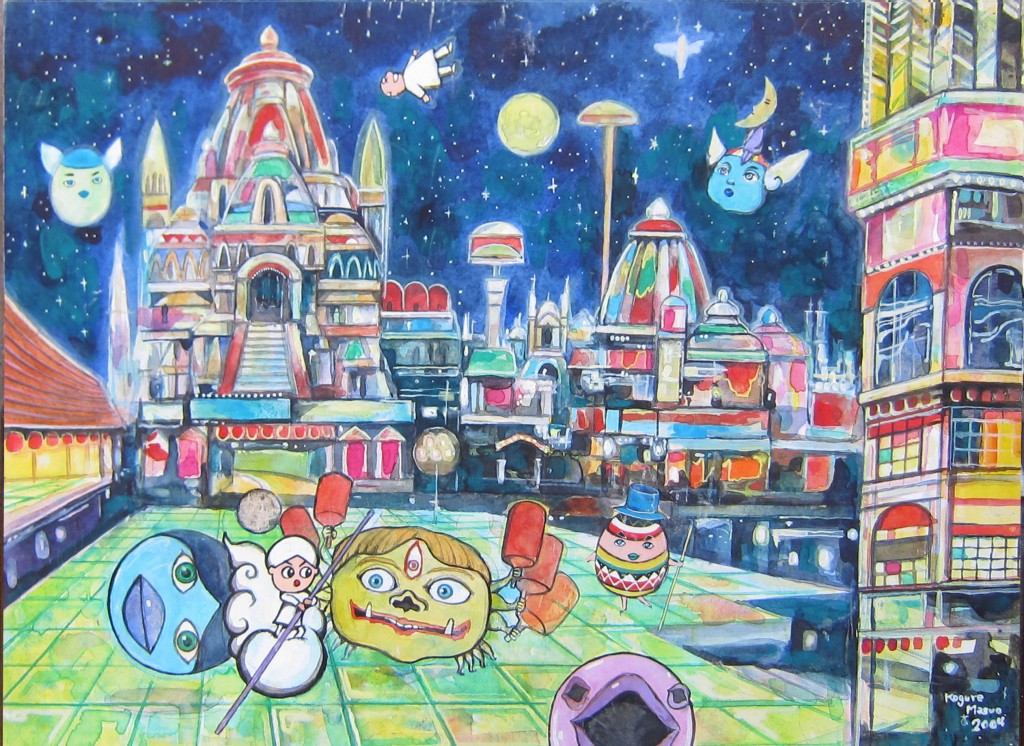 Kari-blood is the unpublished manga piece of mine.

This is the part of it.

It will be up on this site. 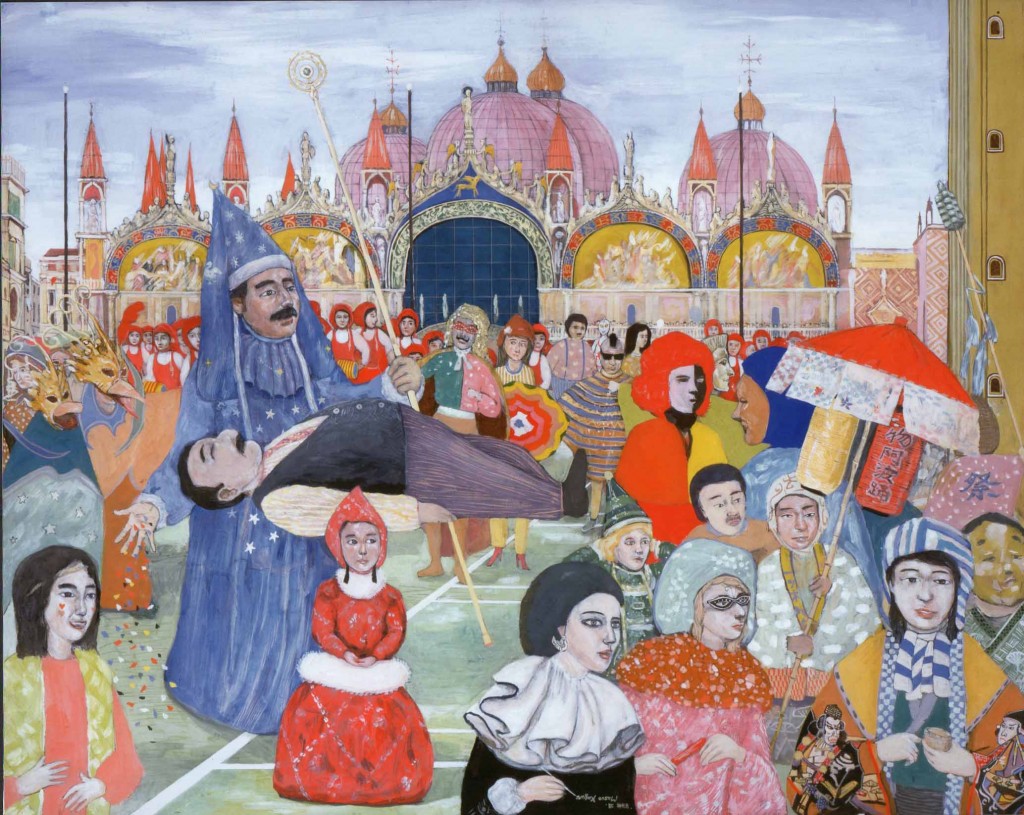 This is the work of my twenties, and this is the first Uncle Siesta.

The image in the picture came from mixture of 2 THINGS.

One is the impression from the Carnival in Venice.
The other one is the men who lying and doing siesta on the bench in Spain.

But first of all, to saying publish “Uncle Siesta” is not me.
It was editor’s idea.

Uncle Siesta in the fountain 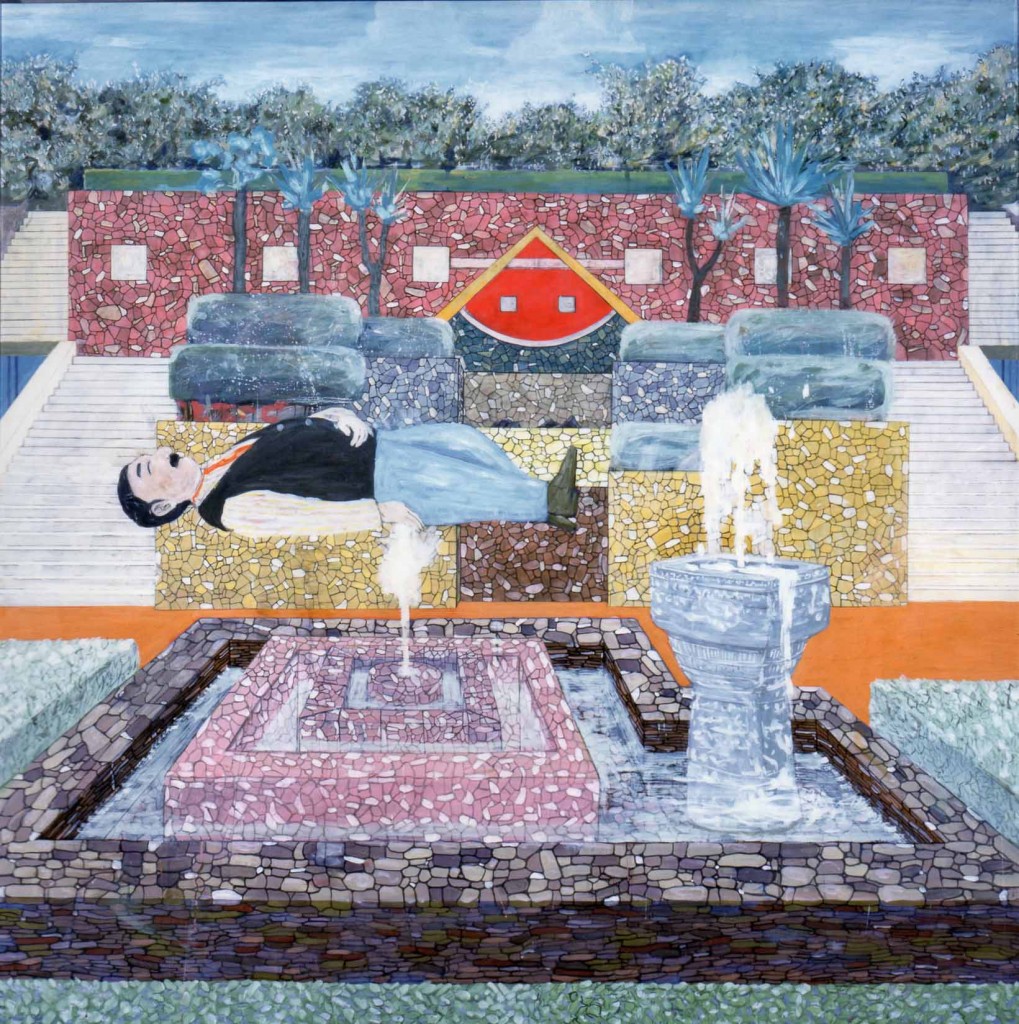 This park is near by Tokyo Dome, but I don’t know it still be there.
When I was in graduate school, I did a part time job in the high school.

This park is in the pass between the Koraku-en station and the school. 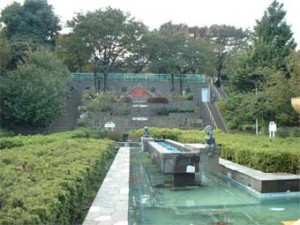 This is the photo of that. 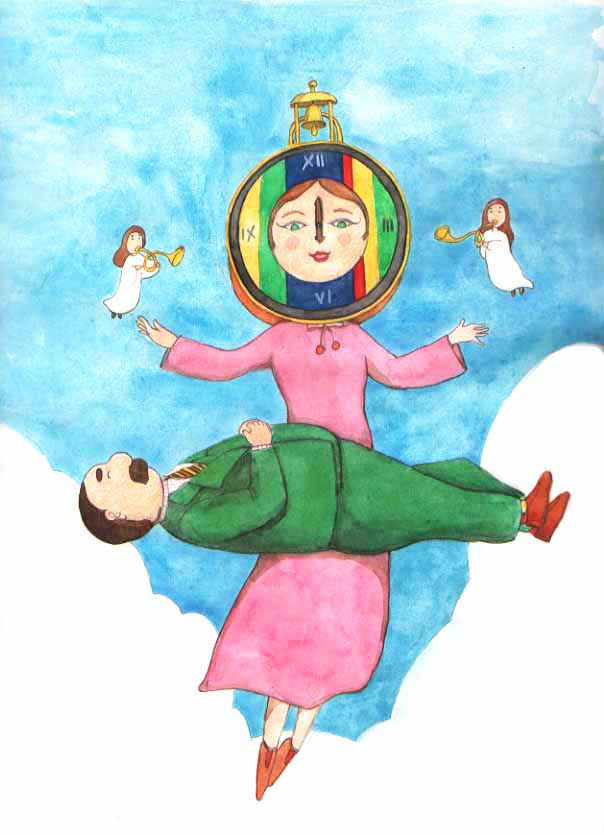 1996 is the my in-depended year from a salaried worker to freelance.
My annual income was 1,200,000 yen,
there was no job, but I have much time.
I can’t remember I drew this picture, because so many picture I made.
小暮満寿雄 Art Gallery
ファインアート
商業アート
出版
ENGLISH