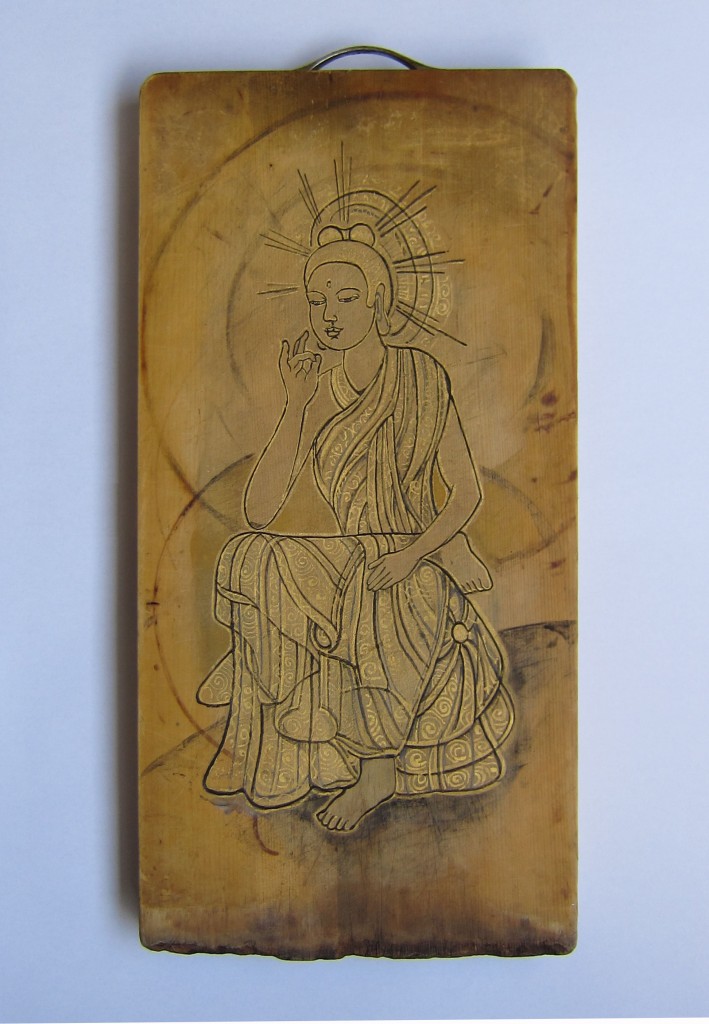 I grew up in the temple from a childhood term to 29 years old.
The temple call them “Roku-Zizo” means 6  Zizo Buddha statues.
I was always hear chanting sutra and bell of the temple.
Old Buddha engraver was always chanting sutra
and engraveed the stones by  his chisel. 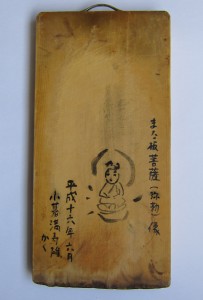 “Manaita” means the cutting board.”Miroku” means the Bodhisattva from 5,670 million years after future for saving people.

This is the drew on the cutting board used for 13 years
when I lived in Tunashima Yokohama. 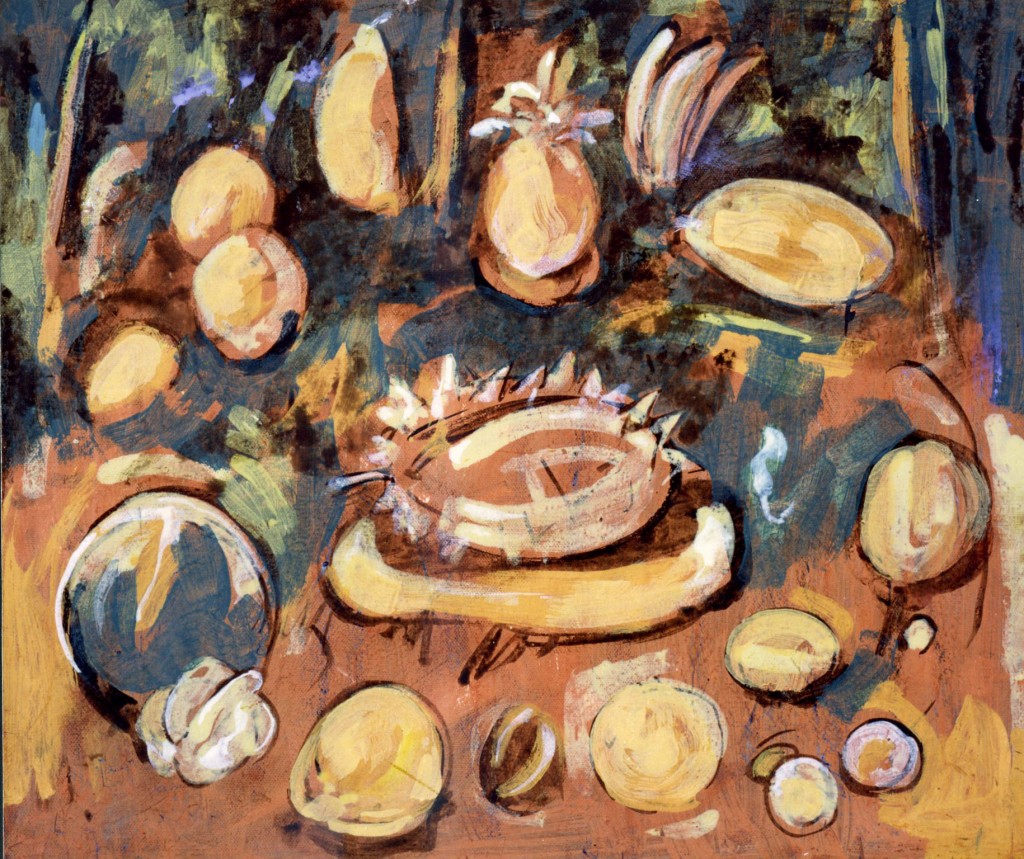 This is the homage of “The vegetable Nirvana” by Ito Jakucyu.

The position of Gotuma Buddha is in drian fruit. 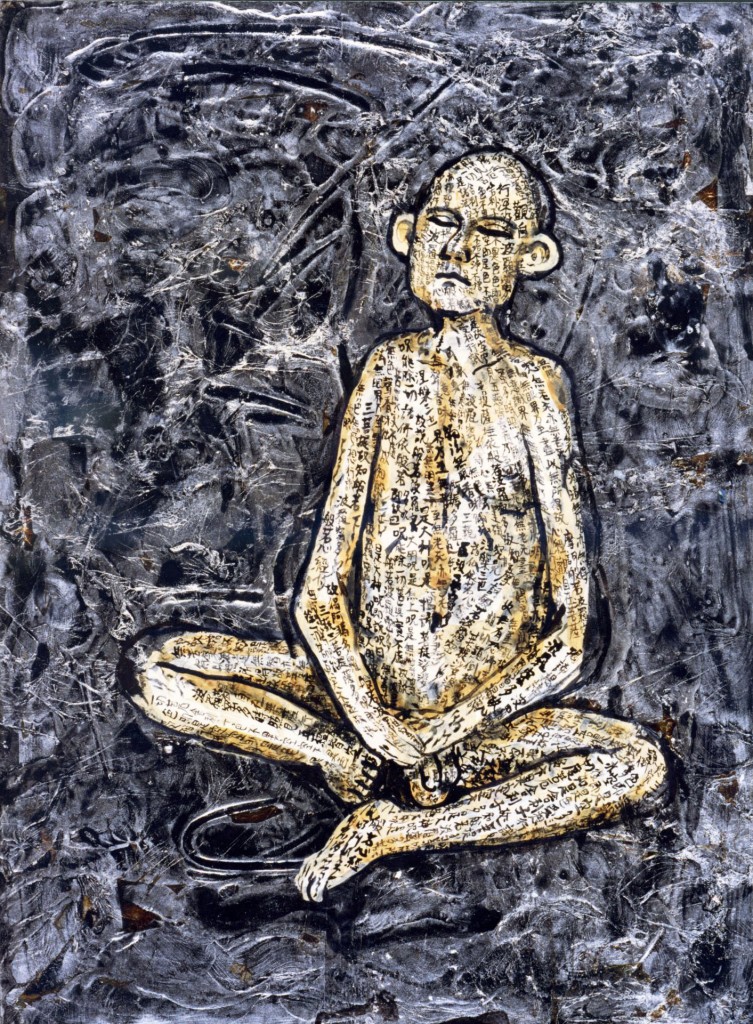 Hoichi the Earless is one of the most famous ghost story in Japan.
Sutra was written in his body for guard from the evil samurai spirit.
Dozing Fugen Bodhisattva 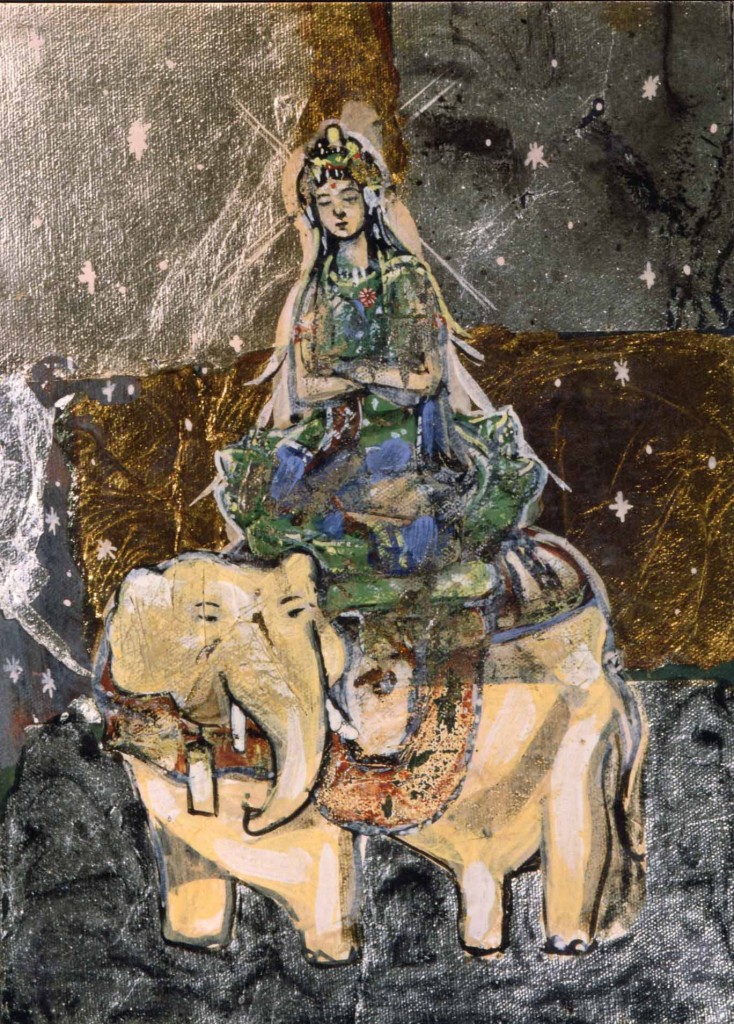 Fugen is the Bodhisattva of wisdom and wealth.
Silver foils are stuck behind the picture.
Kujaku-myo-ou has note type PC 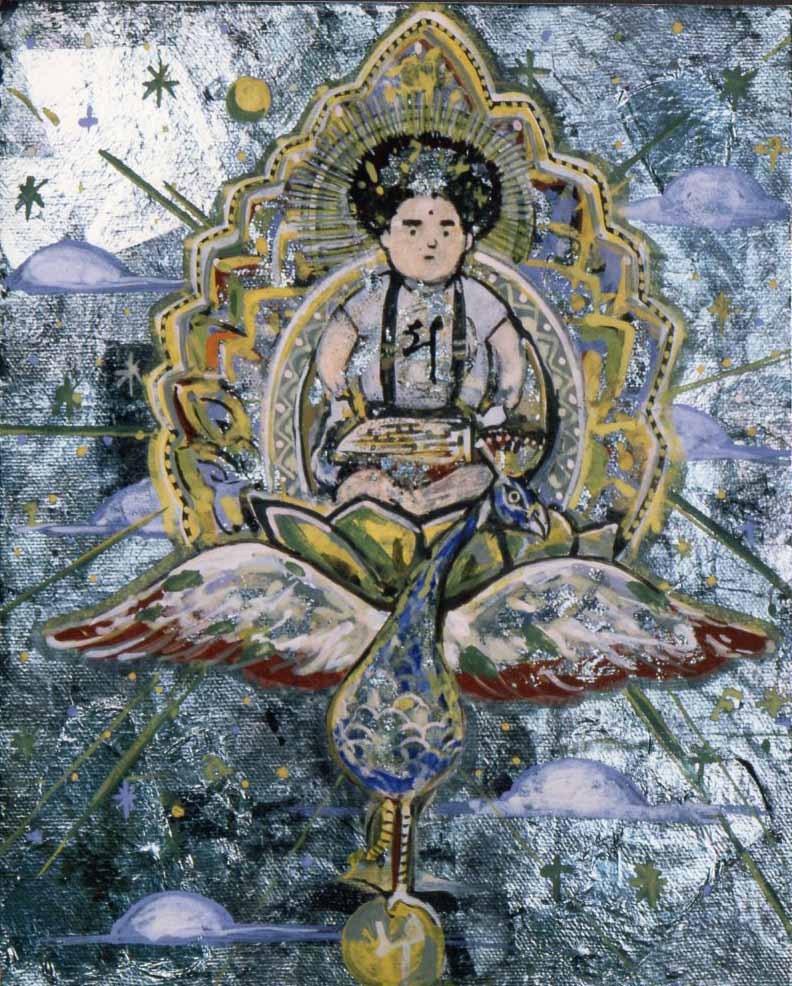 Kujyaku Myo-ou means the god of peacock who has superpower.
The monk of esoteric Buddhism told us that
chanting sutra of  Kujyaku Myo-ou is powerful but dangerous.
If it make mistake in chanting,
he might be distortion of space inhales.
That because why I  draw note type PC, so I felt something  fear from it. 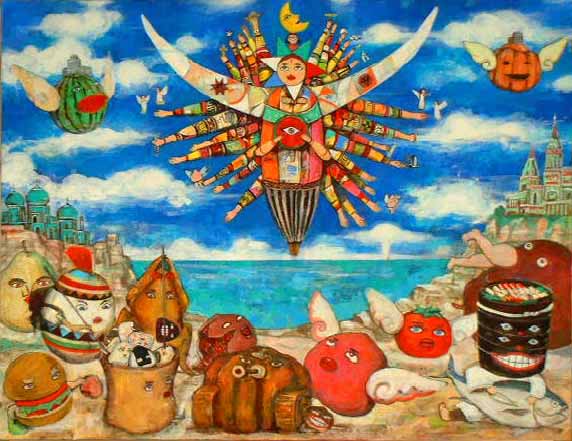 Mexican  thousand hands Kannon appear in the Caribbian sea.
Fundamentally the Buddha statues are visualized from the energy of the universe.
Because it depend on the country and area, it is OK to change their each form.
That is my thinking.

Because reason why I  put the Mosque and Church and Temple
paint together in the same picture.
But in the picture,chicken and peach, garnet, hamburger…
I wonder they have bad  related and quarrel each other. 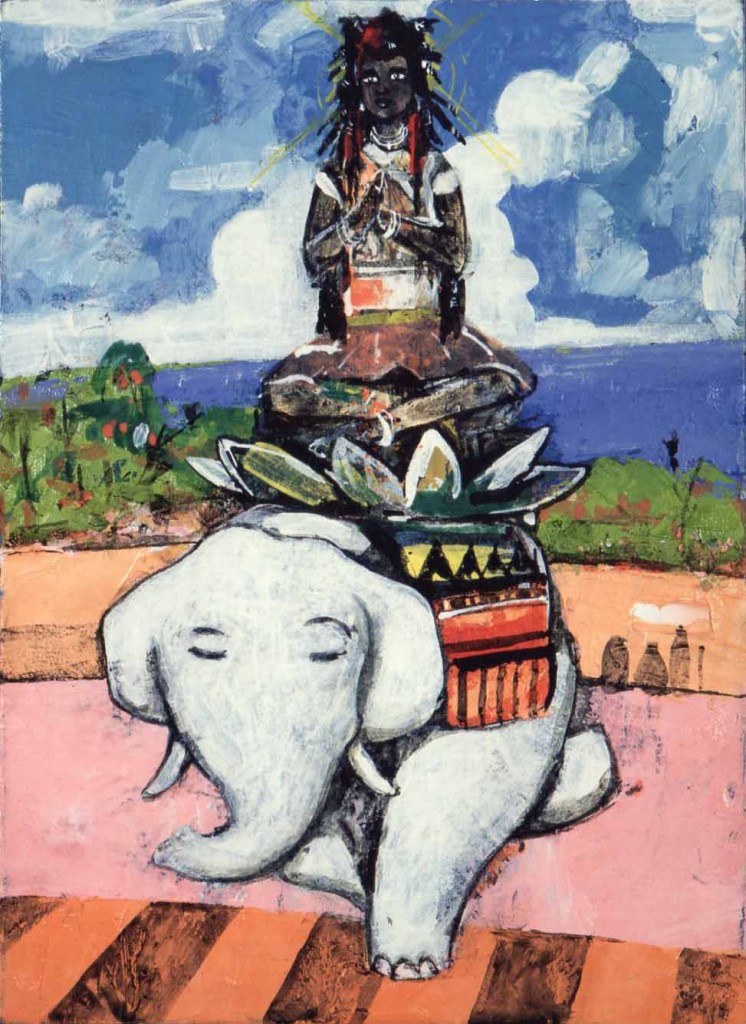 Why Kannon is wearing reggae costume?
You should remember where Gotuma Buddha born in.
Oh, you say Jamaica is not India.
Yes, you are right but same hot country isn’t it?
And Indian people really like listening reggae, please say any more…

I want to say that blue sea is not imagine related in India,
but some Buddhism sects are born in Indian sea area.

This picture was made by such a feeling from.

The Mandala of the Diamond Realms 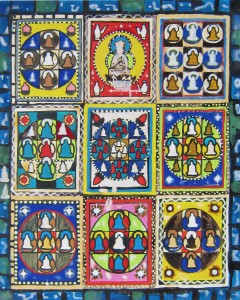 The Mandala of the Womb Realms 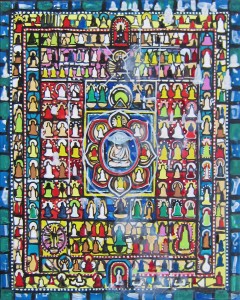 The Mandala is the design of the universe.
And it expressed and visualized the instruction not only told by the words.

The Mandala of the Diamond Realms just like fatherhood.
It express the structure of the universe.

The Mandala of the Womb Realms just like motherhood.
It express the comprehend of the universe.

The Mandala of the 2 division express the perfect world. 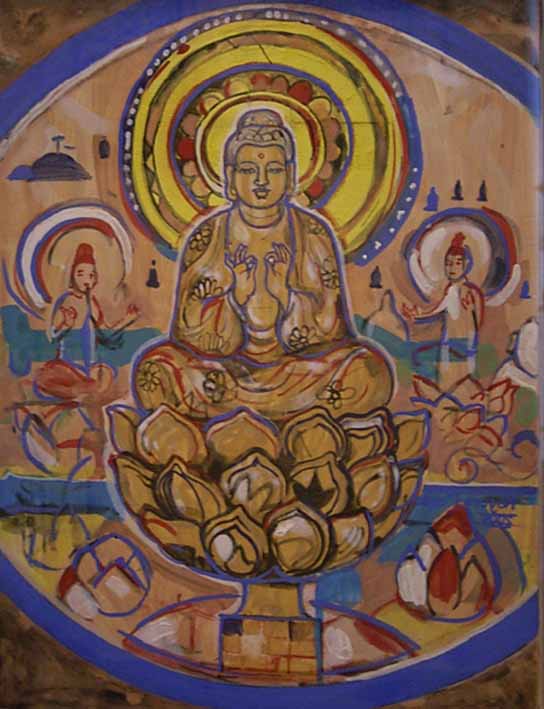 3 sets Buddha statues is very common type in Japan.
More precisely speaking, Bodhisattva is before becoming Buddha.
They are still training then.
They say the origine of Amitabha Buddha came from ancient Persia.
He was god of paradise turn into Buddhism teaching.
Fruits Miroku Bodhisattva 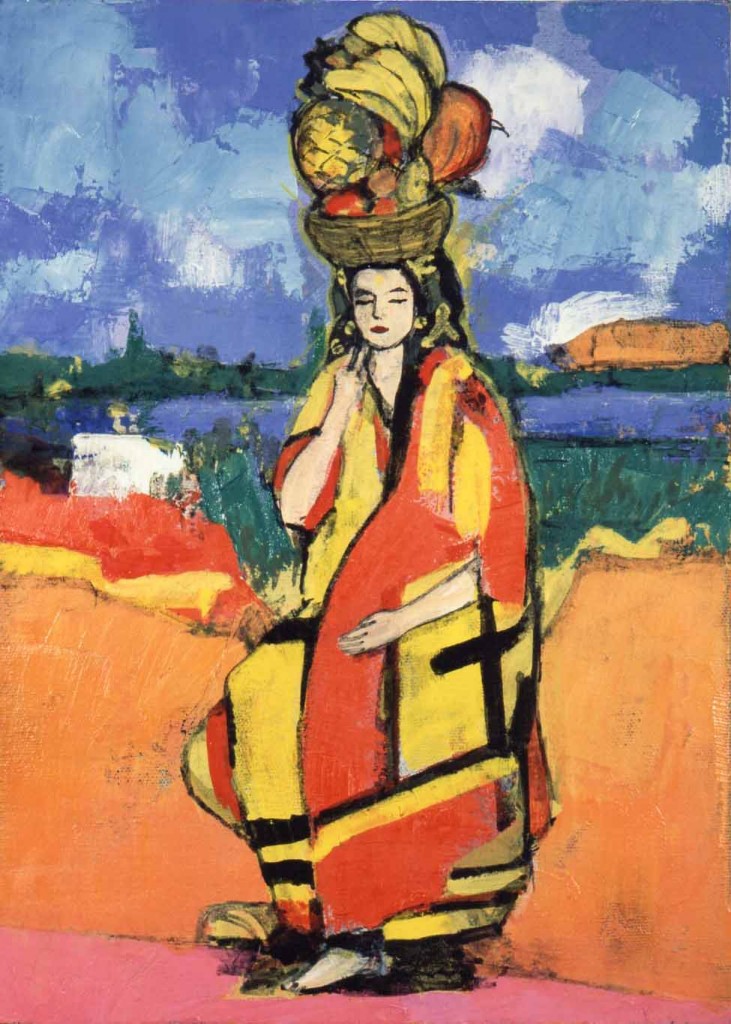 In Sanskrit, Miroku says Maitreya.
This is same concept as Reggae Miroku Bodhisattva. 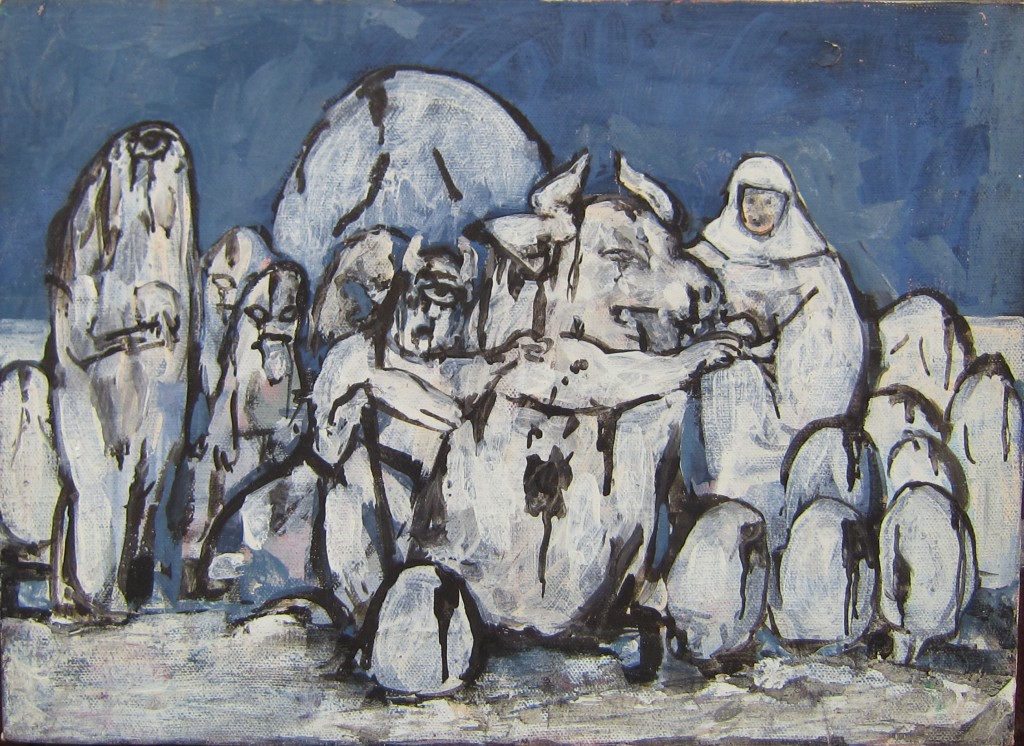 Bhikusuni is nan of Buddhism.

It came from “Hino-tori” by Tezuka Osamu’s  great manga.

One Bhikusuni  was confined the slit of the time.
She healed some damaged monsters. 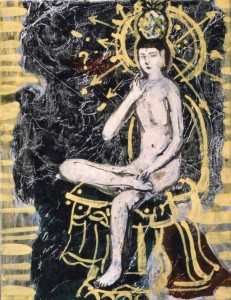 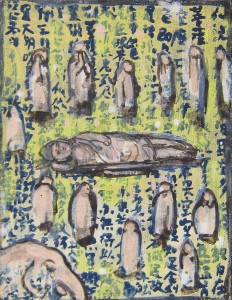 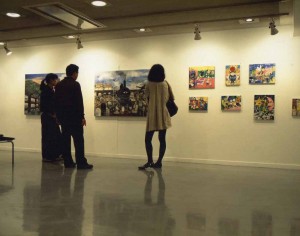 From here are not Buddha statue.
They are change to Hindu statues.
(Precisely say they are not statues, pictures)

Matuya the incarnation of fish 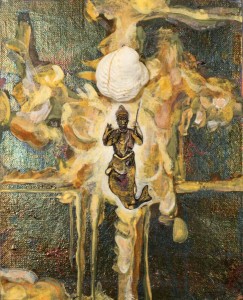 Varaha the incarnation of wild bore 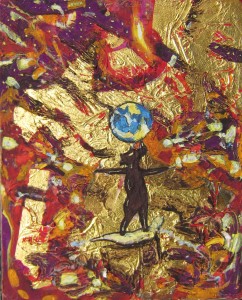 Narasingha the incarnation of
half lion & half human being 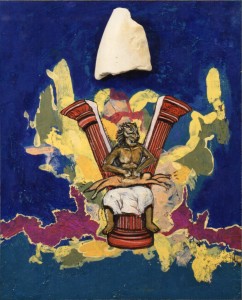 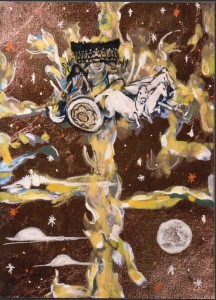 Visne is  the most popular god in Hindu
who change the form depend on the situations.

Prince Rama in “Ramayana” is also ,he is the main role in the Indian ancient epic. 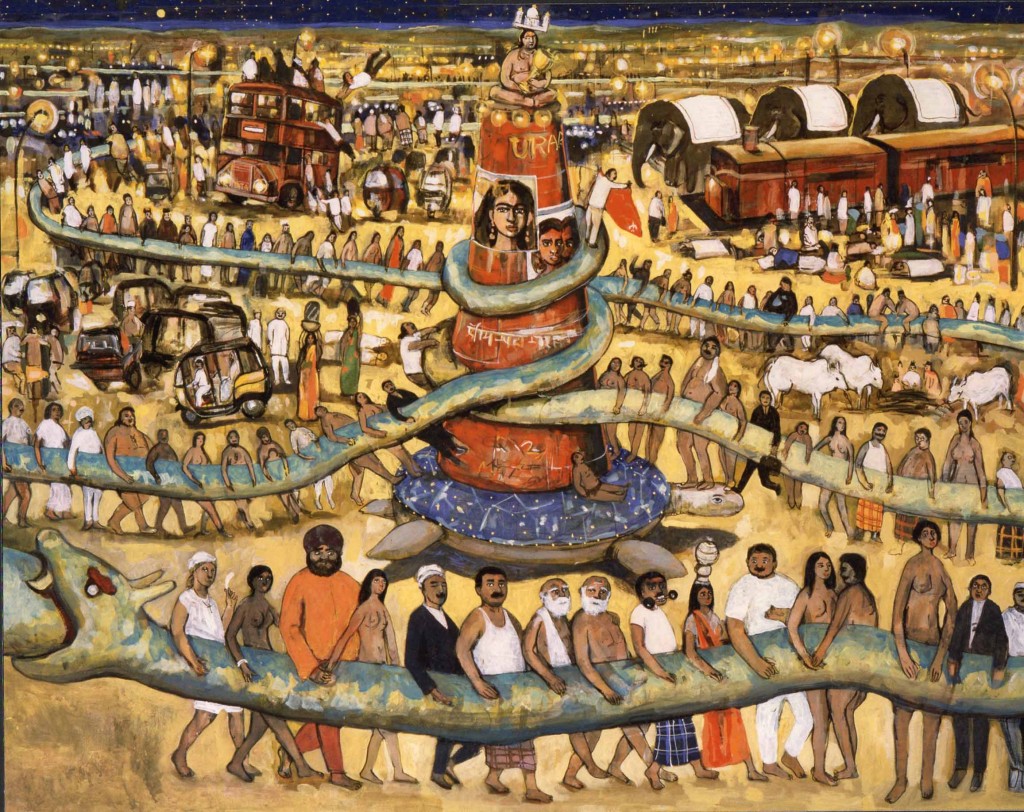 Kurma is the most poplar story in Hindu.
But most people knows from Indian story,
it is poplar from Angkor’s reliefs.
This is struggle with the gods and asura the devil of Hindu.
In old time, it is no border gods and devils
This  story is good example of that. 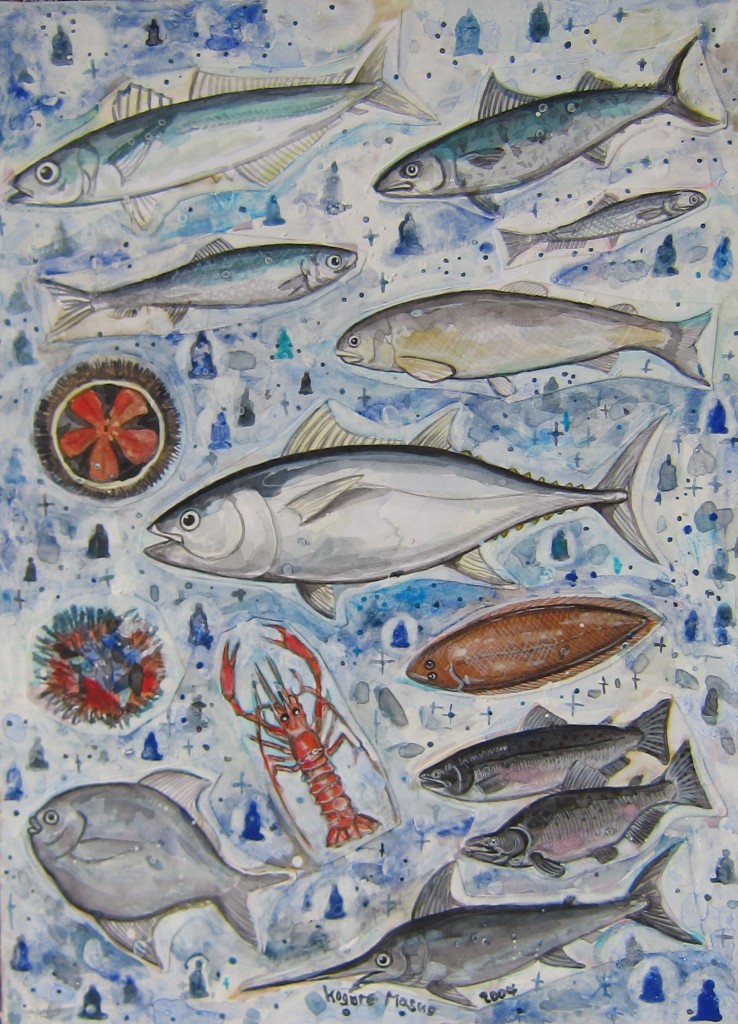 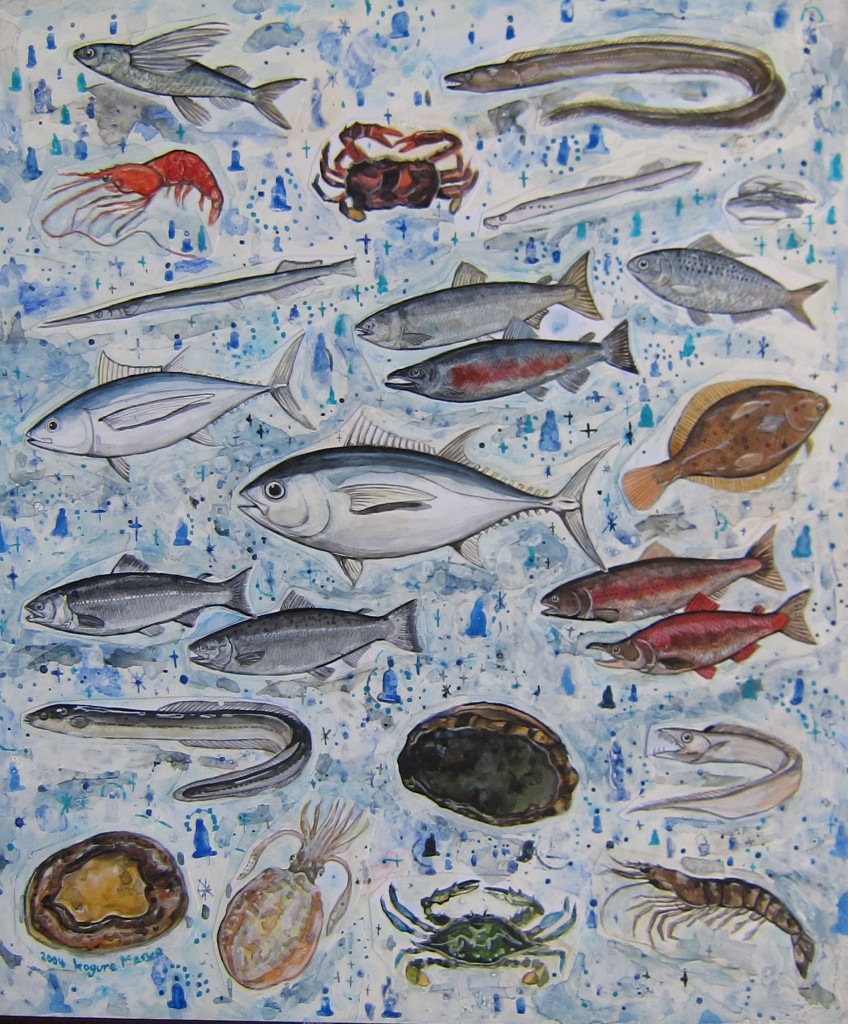 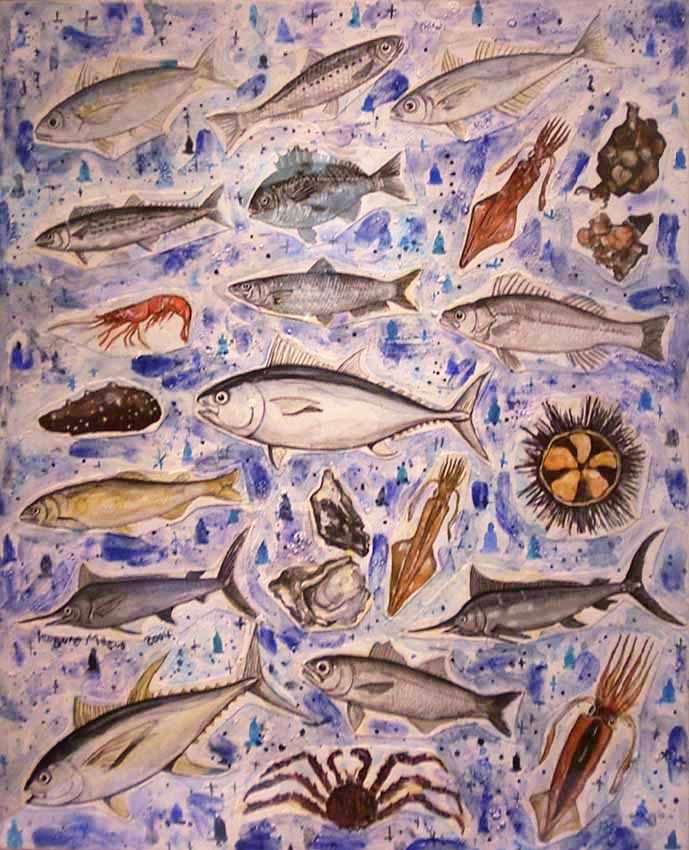