DOSUKOI
It is a room where gravity always changes here.
In this room, sumo, a tank, a track, and a temple always change weight.
But in this world, everybody happy.
It lives on good terms every day!

The building of a large Buddha
(Summer Virsion) 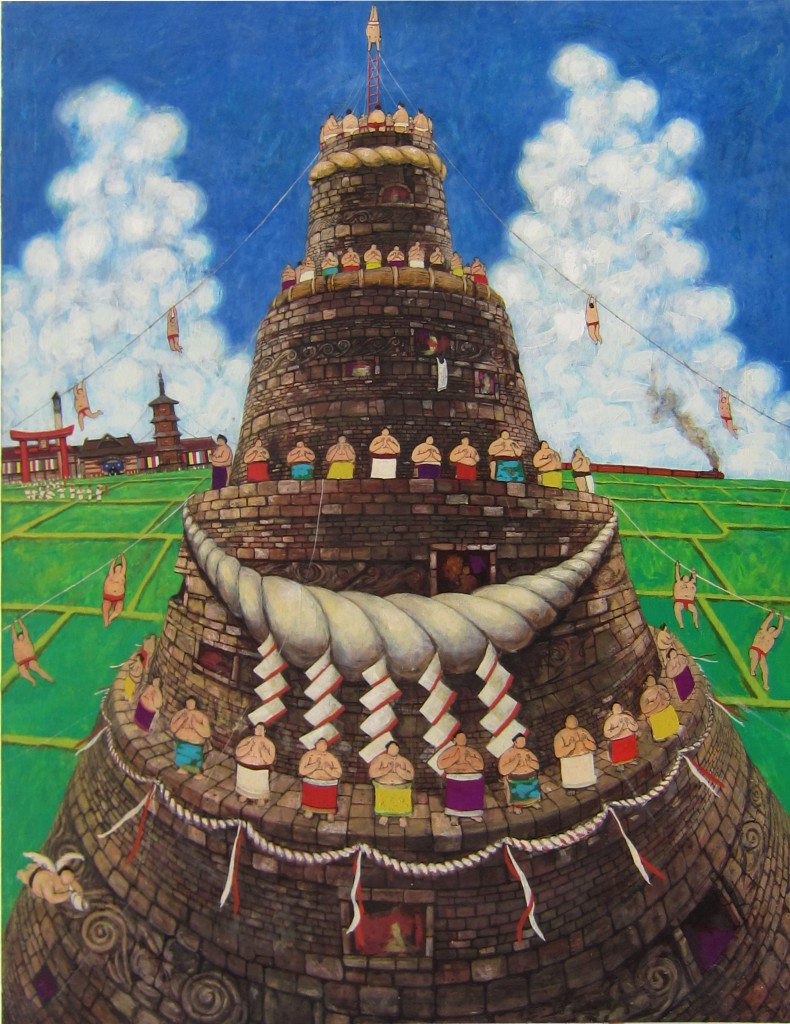 Some people wonder why sumo wrestlers
are drawn in the picture.

The building of a large Buddha
(Autumn Virsion)

A large Buddah appears gradually in the stupa.
The series of ‘The building of a large Buddah’
has 4 peices 4 seasons.
The beginnig is the summer one,
and this picture is the 2nd one.
But a large Buddah hardly build up only 1 year.
Between the picture & the picture,
a long long time asleep.
Meantime, the stupa was settled a lot of sumo wreslers.

The building of a large Buddah
(Winter version) 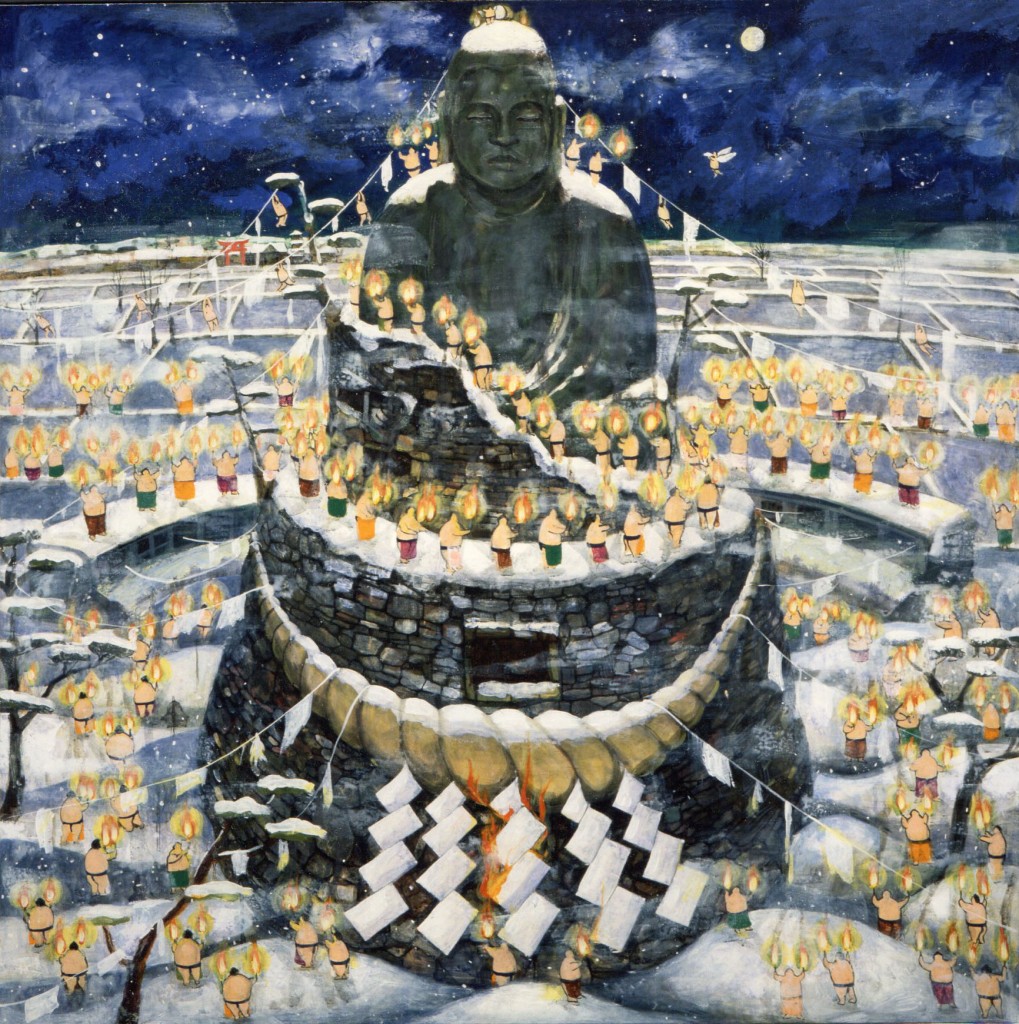 A large Buddah is put up with a frost winter.
He just wait coming spring.
Anyway, sumo wrestlers have hard job.
We really worry about
if they have catch cold, it might be have a bad influence
in the ground tounament of sumo wrestling.
Spring has come.

The building of a large Buddah
(Spring version) 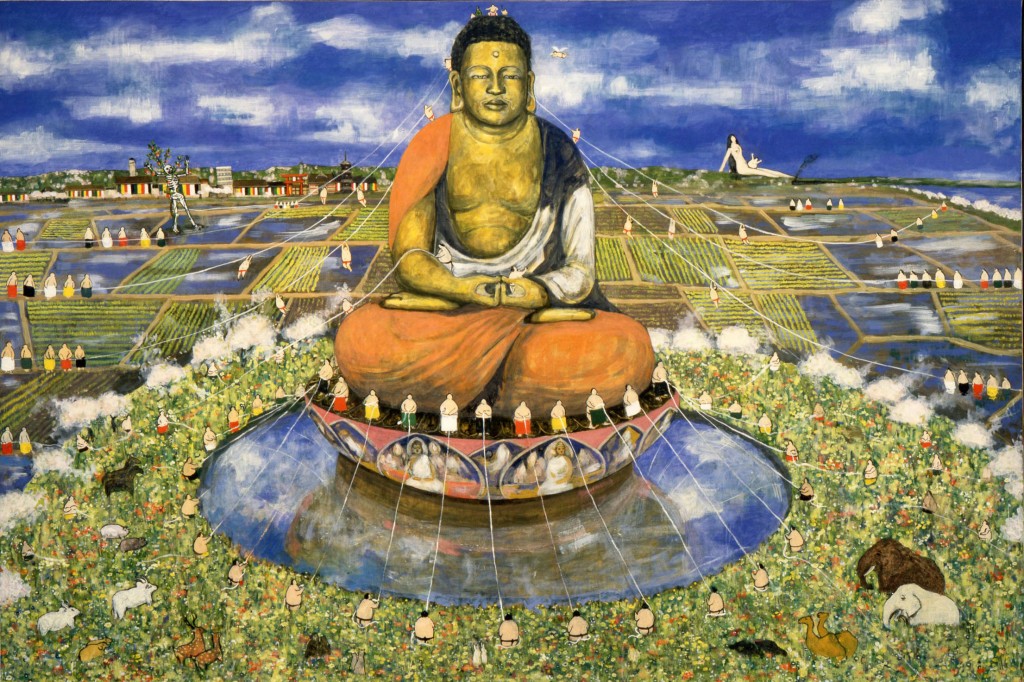 Amitabha Tathagata is built at last and it pushes down
An angel is already natural it blesses that the figure of Great Buddha
appeared and an elephant, a deer, the pig, the cow, the camel,
and the chicken were remodeled at gold
Good fortune-telling is good! 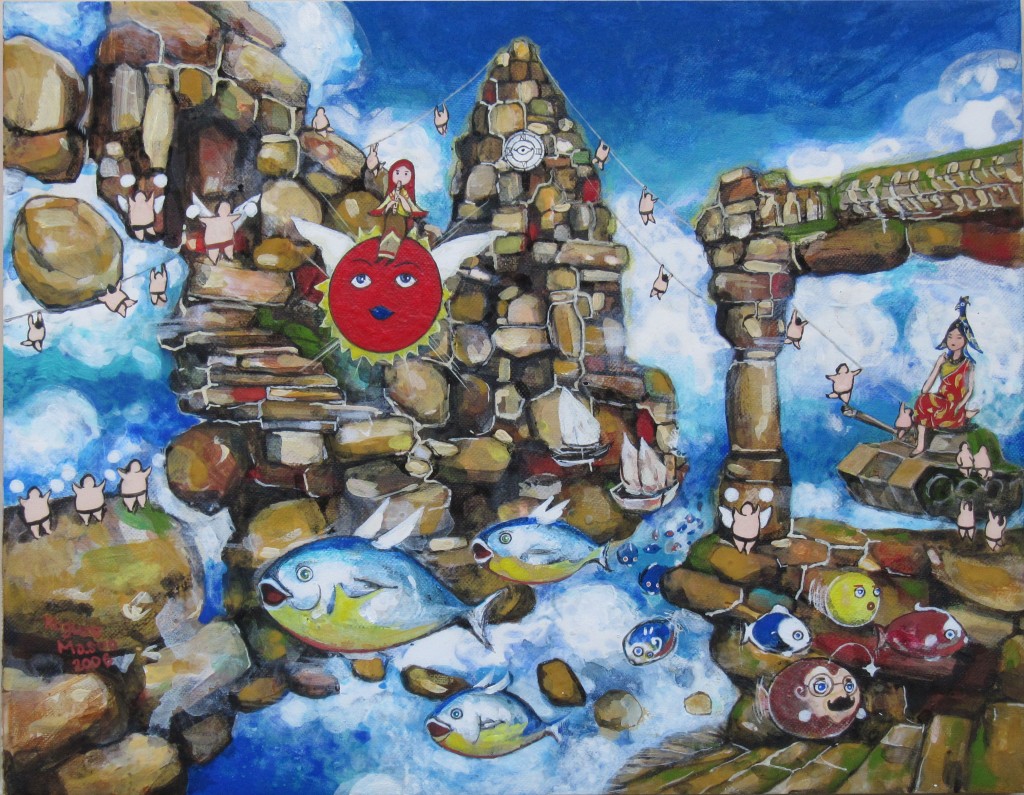 An “extended family” takes only a title from the picuture
of surrealism maestro Rene Magritte.

When I’ve seen the Magritte exhibition for the first time
was elementary school six years,
a wonderful sky which modeled the figure of the bird was printed on eyes.
When drawing this picture I didn’t imagine although Magritte masterpiece,
suddenly —  the memory has revived.

A sumo angel goes back and forth freely the world
which does not have distinction in water, air, and gravity.
Good Hakke yoi! 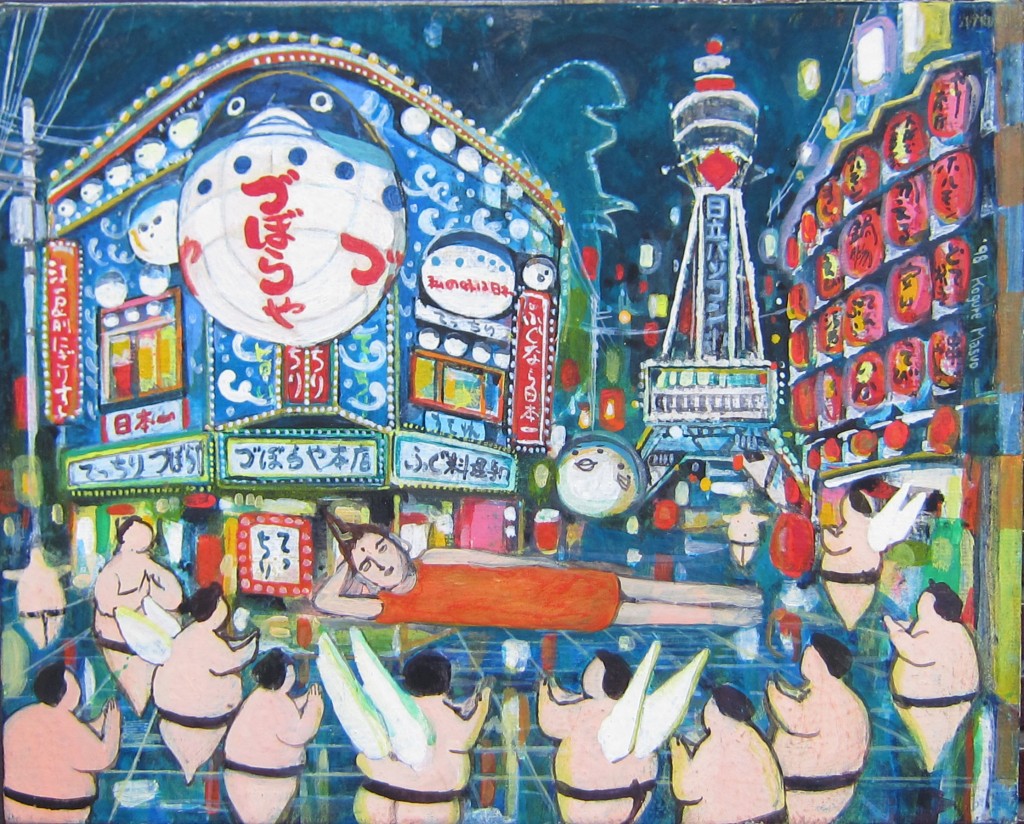 The healing Buddha of Ulambana 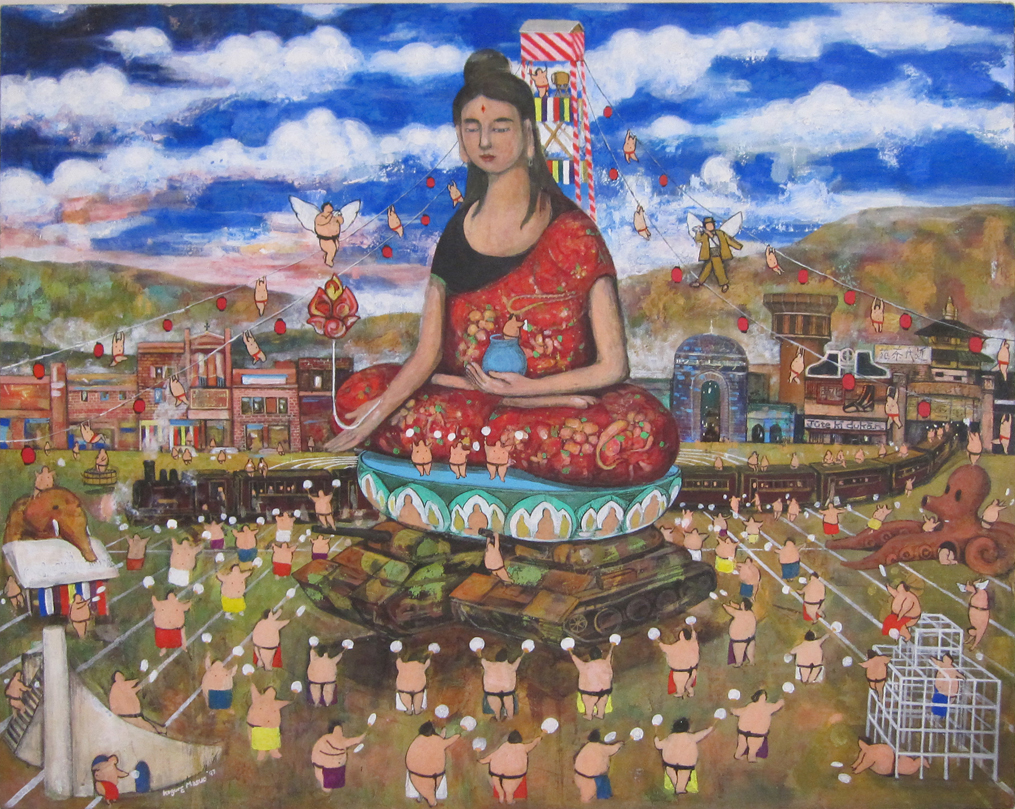 Origin of a word came from Sanskrit of a Persian course.
And it was translated into Chinese and it becomes

Ullambana has a meaning which relieves an ancestor from the pain after death.
A basis is thought born in China.
It is not related to the Buddhism which Gautama Buddha gave the sermon on.

Pronunciation of Ulambana is  just like Mongolian’s capital Ulan Bator
It might be the origin of a word is whether it is near.

It is a wish about non-illness of people of a world.
Osumo Angels hold a Bon festival dance convention. 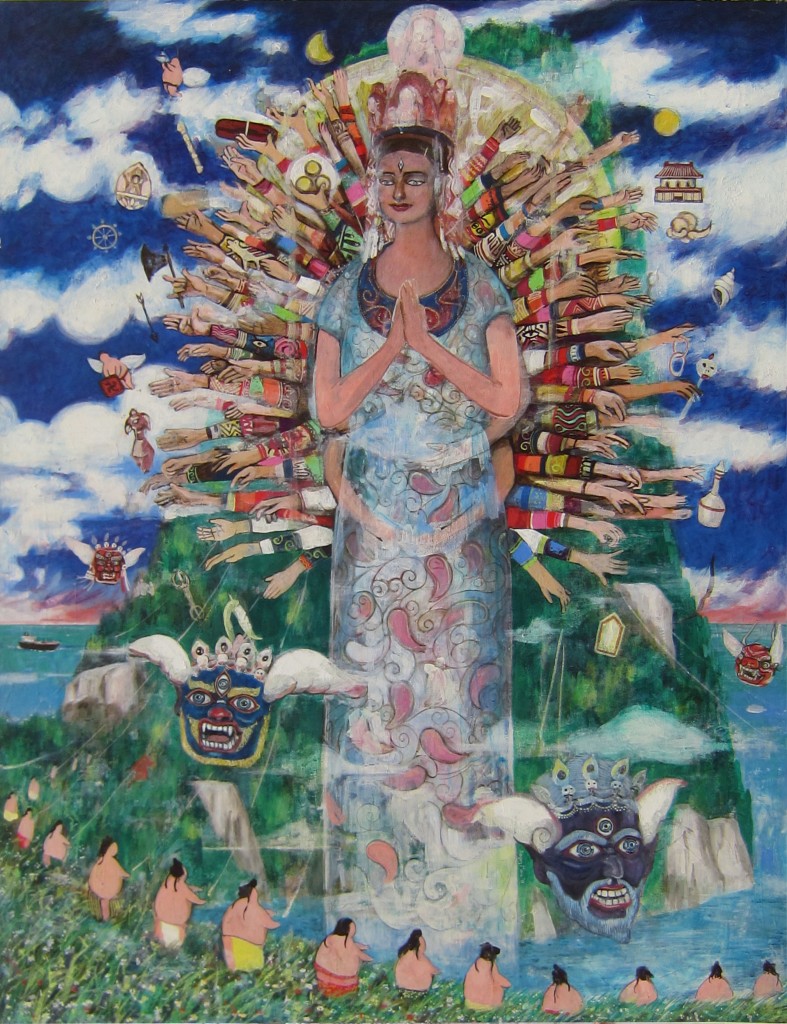 Kannon makes  to change  characters
in order to a public occurrence and the heart of those who ask for help .

There is Tibetian flying objects, and Aska period sumo wrestlers in here

The building of a large Marishiten 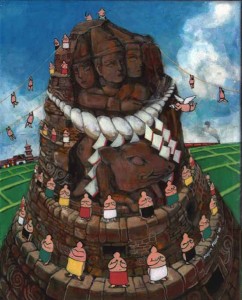 Marishiten is not Buddha.
She is the victory goddess came from ancient India.
In old time when 800 years ago,
a lot of samurai respected her.
Now most people forget her,
but you can see in Tokudai-ji temple in Ueno Ameyoko,
and Gosyo-shrine in Kamakura.
This picture based on Kamakura one.

Joyful Kari /
Chandra and Helios are met by a patriot. 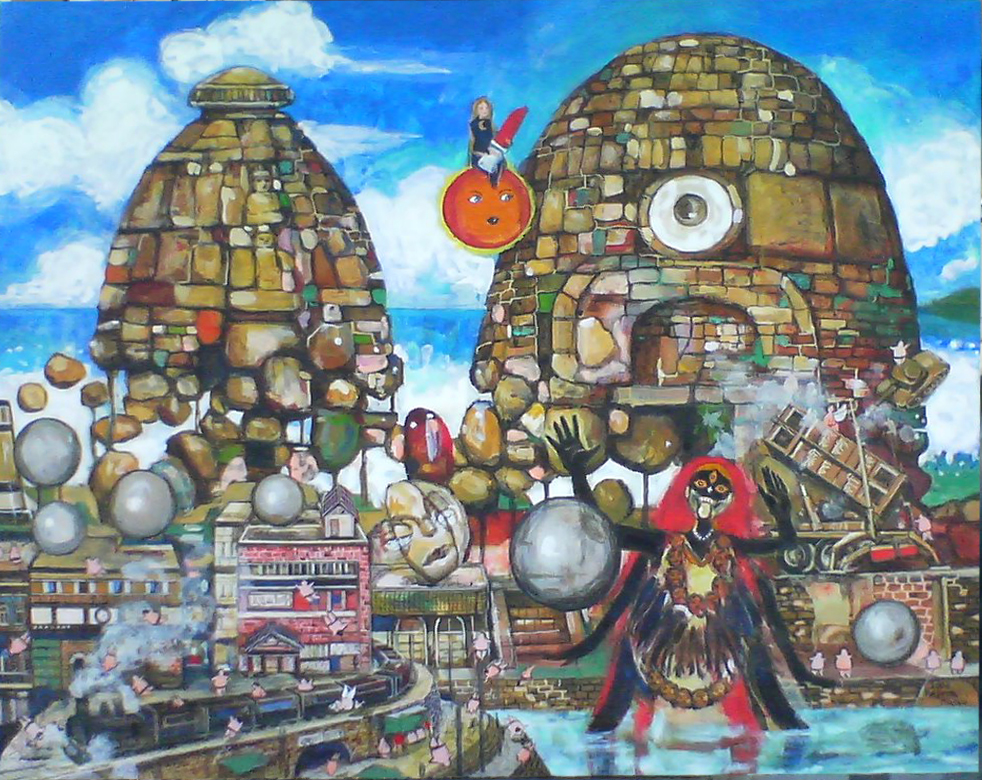 I am sorry for a long title.
Joyful Kari is splendid.
Titles are the contents drawn on this picture.
What was then written.
Kari is the goddess in East India
She likes blood very much,
sometime she killed many goblins and drinks there blood. 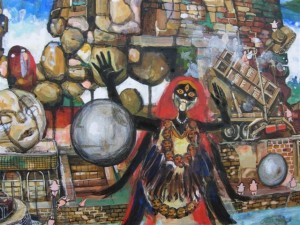 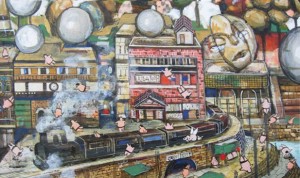 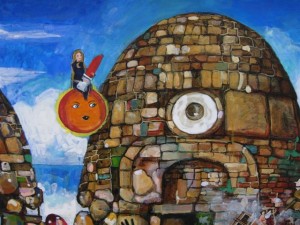 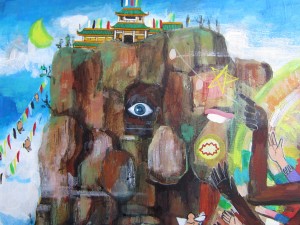 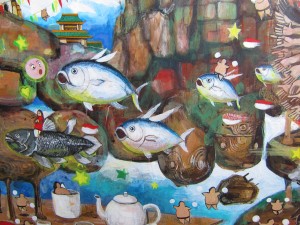 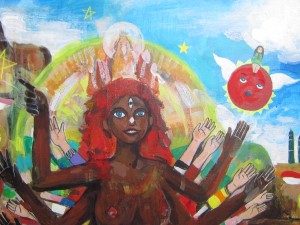