“The Tale of Genji”is not a simple love story ,
but rather a huge world of images.
It is a wondrous work of art that will take you back to the days of ancient Kyoto,
1000 years ago.

You will suddenly see Kyoto, back then,spread out before your eyes.
In your point of view,
images are not only things that are visualized and created within the mind,
but are also agents that serve asmediums toaid in sharing something in common.
In this way, “The Tale of Genji” is a rare work of art,
in which images exist between the lines.
You cannot help but feel the images that existed within the head of the author of this tale, Murasaki Shikibu.
This novel is surely a vehicle of images
that goes to and fro between the author and the reader.
So now, let’s take a stroll into the world of the other side of the brain.

Hikaru-Genji was handled temptation of Oborodukiyo-nokimi,
and he has relationship between her.
Oh! It is a big problem, because  Oborodukiyo is a woman of the Emperor Suzaku!
Genji must be fugitive himself,in Suma and Akasi.

This is the first climax of”Tale of Genji “.
After Genji was gone from Imperial Court, some bad news happened there.
So,Genji  is called back after little while.

Left side is Genji.
right side one is the ghost of his dad Kiritubo-tei the former Emeror.
Kiritubo-tei told to Genji that “Go back Kyoto immediately!” 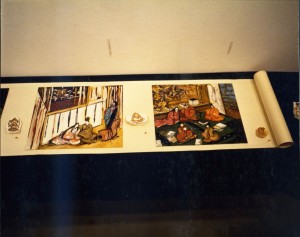 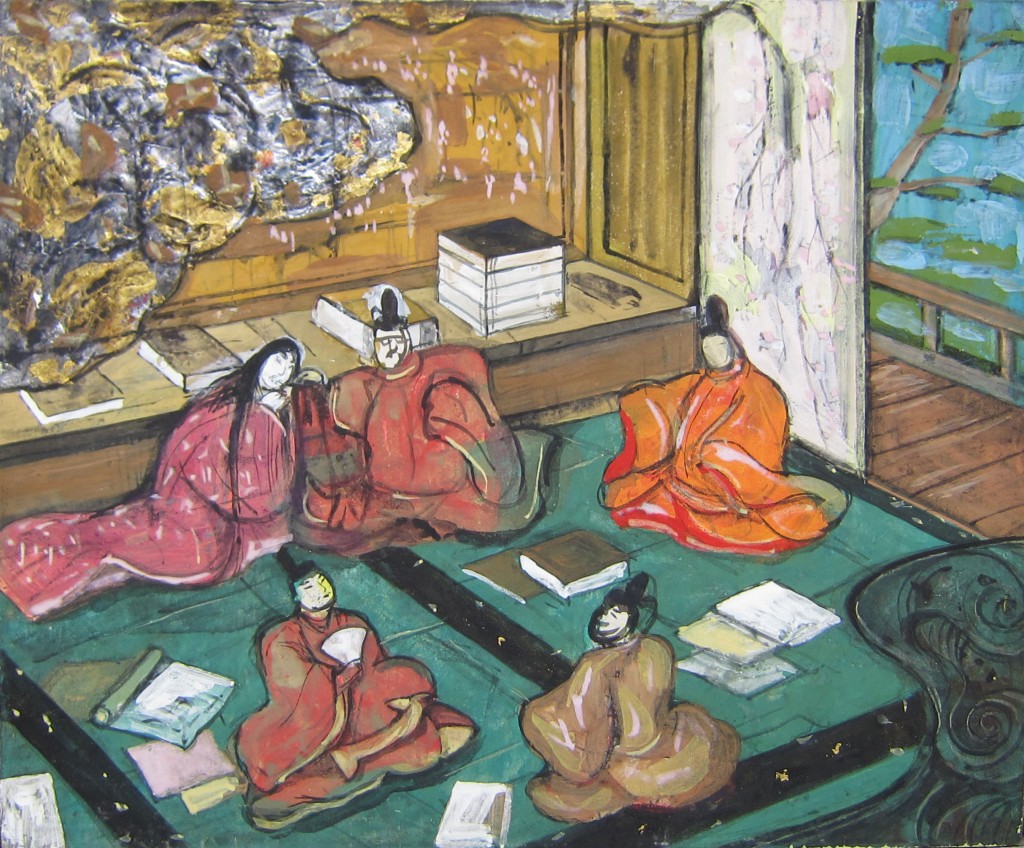 Noble men talk about women’s lanking.
They agree middle class women is the most favorite. 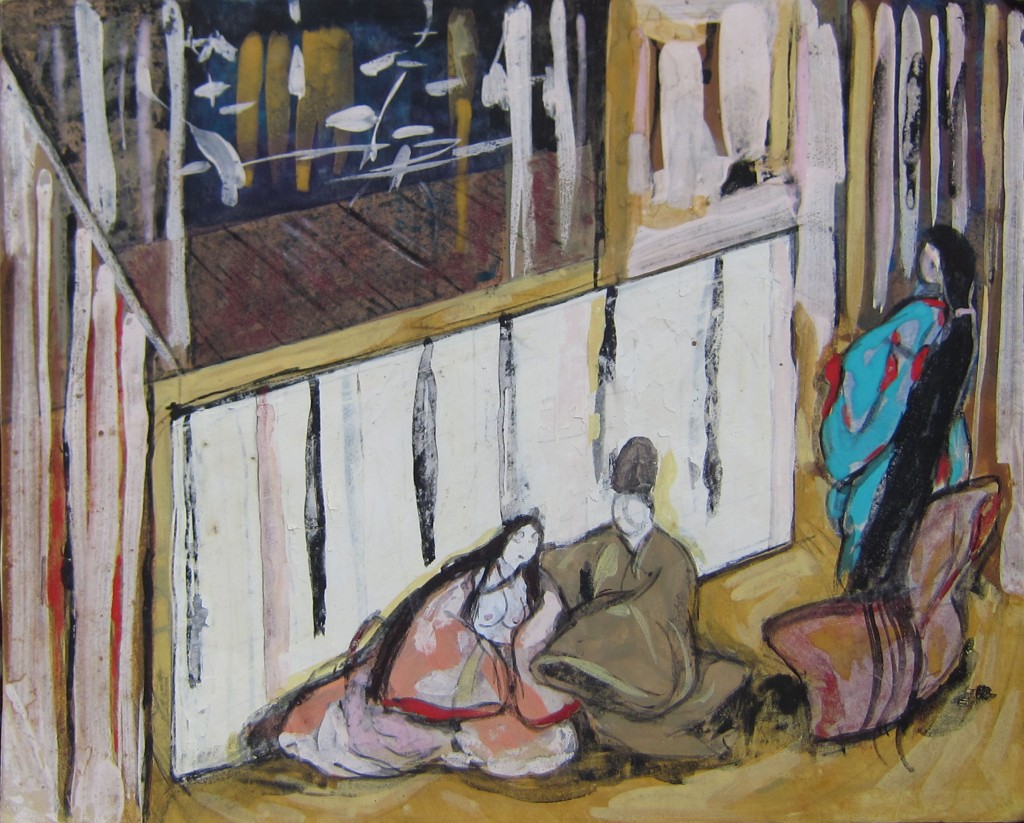 Genji has a special hidden noble woman Rokujyo-Miyaundokoro.
He found a strange house between the pass of Rokujyo.
Genji remember that middle class women story they talk about. 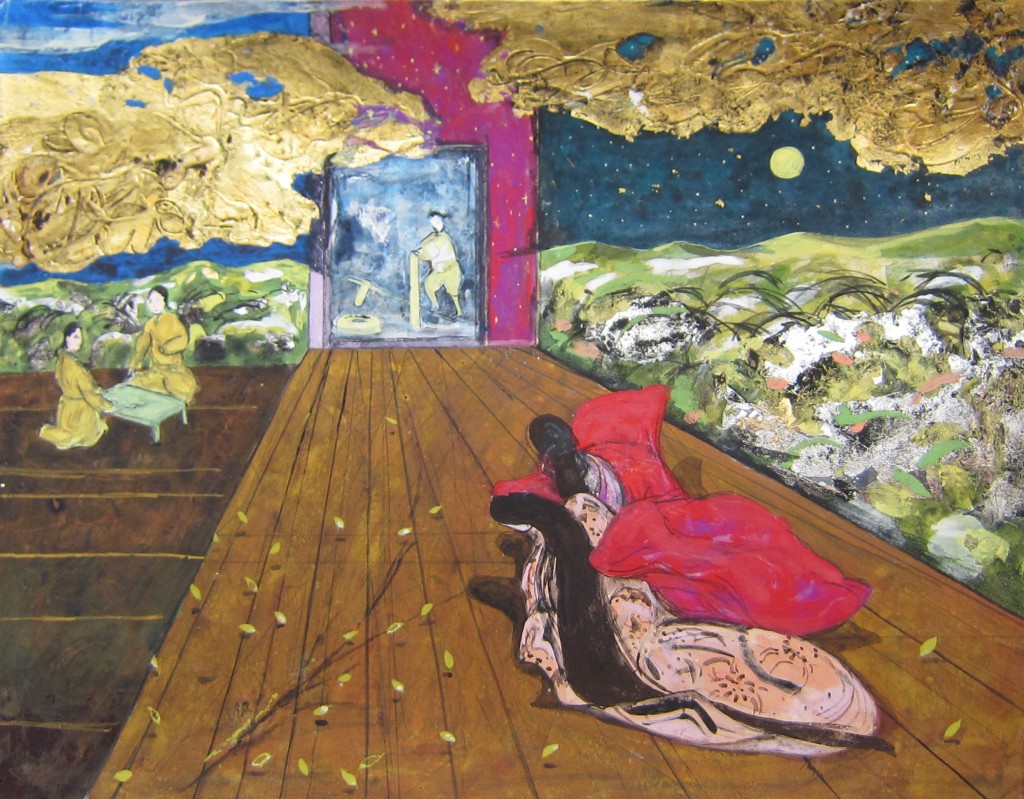 This is masked Genji with middle class woman Yuugao. 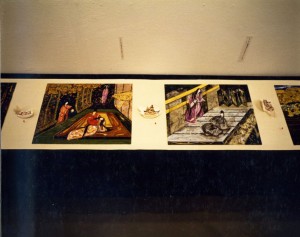 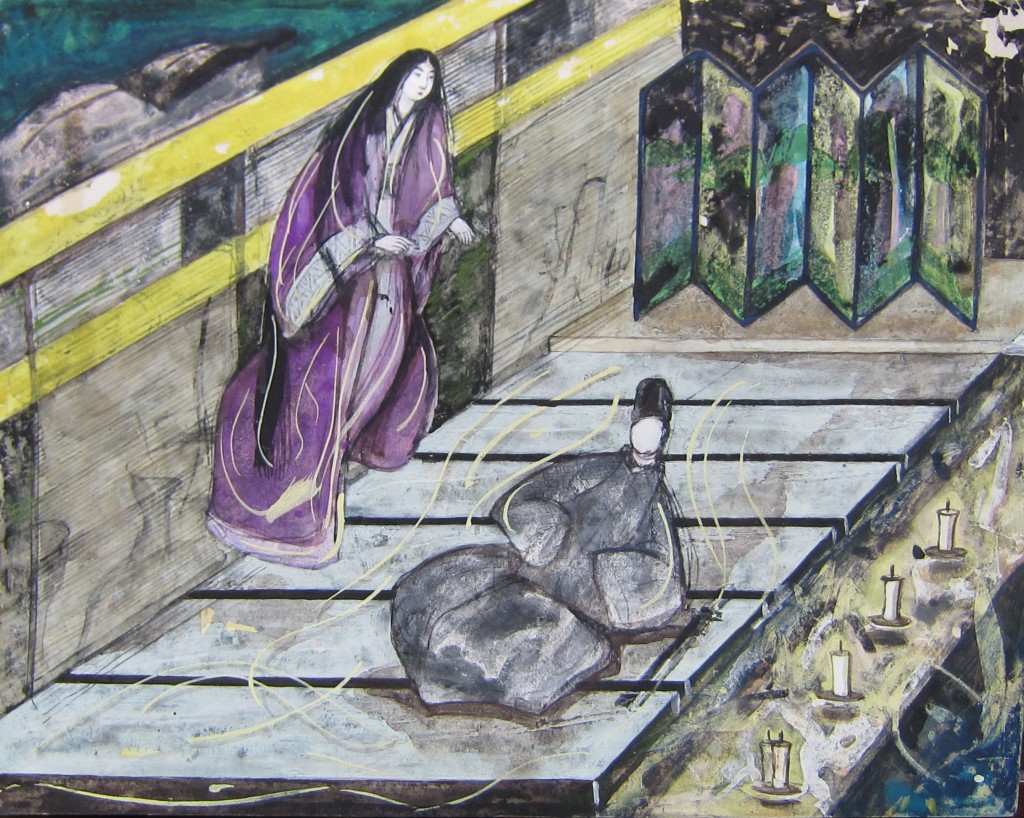 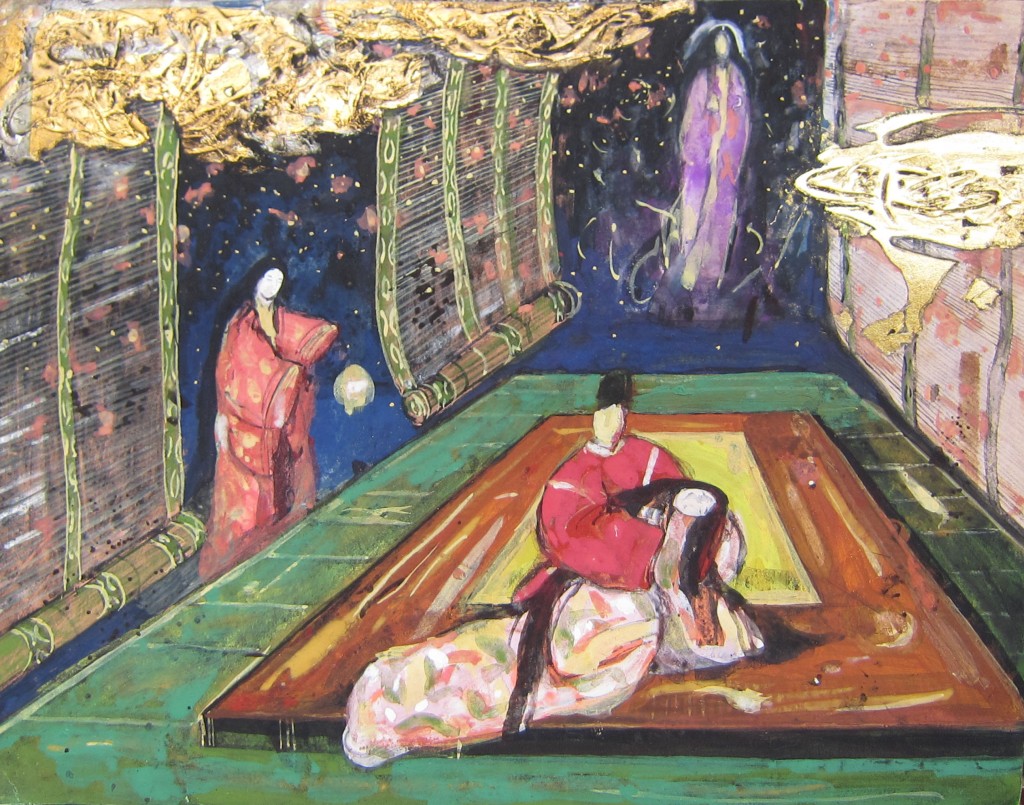 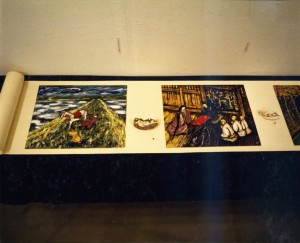 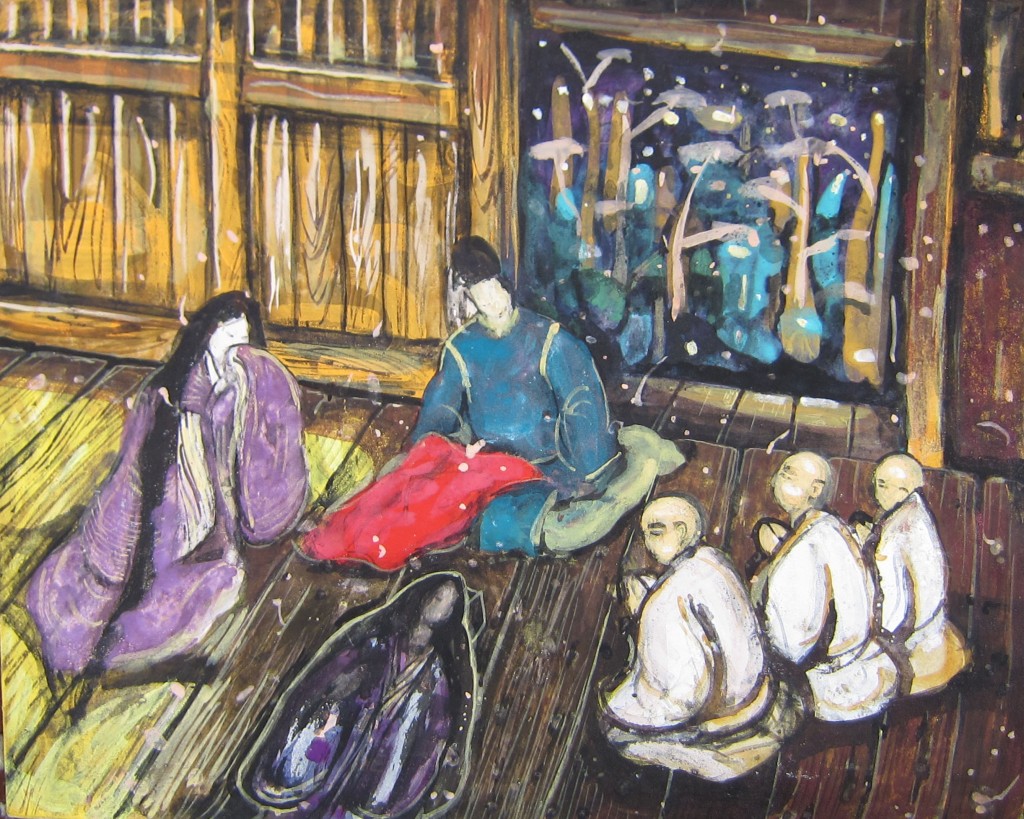 Genji falls off his horse 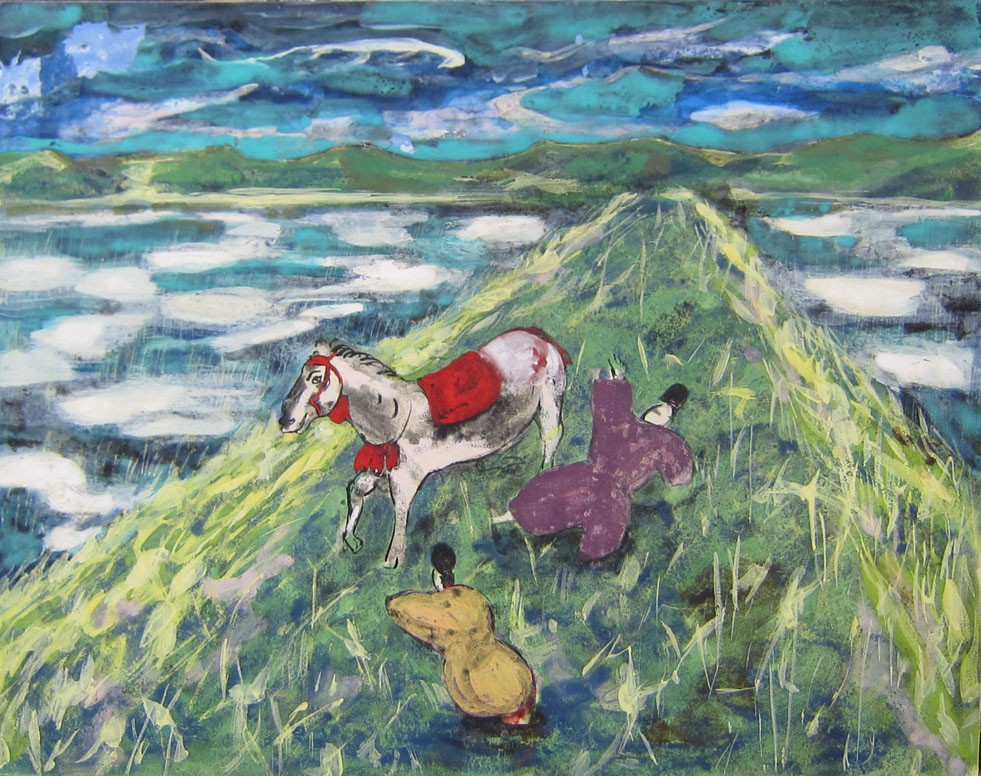 An amorous in Uji 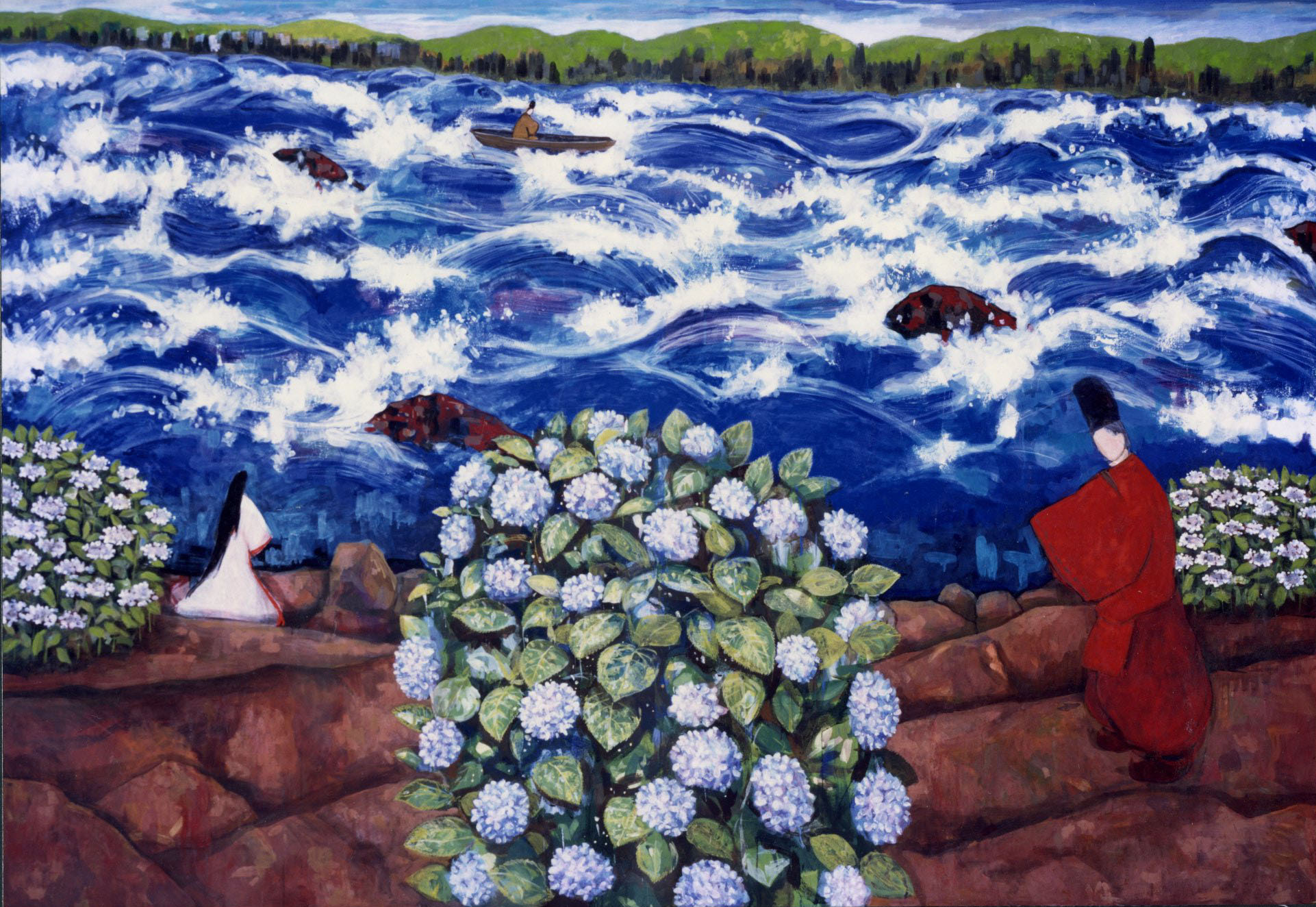 1/3 of the Tale of Genji is after world of Genji pass away.
It takes place from Kyoto to Uji.
You can hear of sound of the wind and voice of Uji-gawa river.

In the picture Ukifune is a woman close the water who is about to commit a suicide. 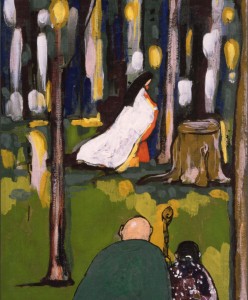 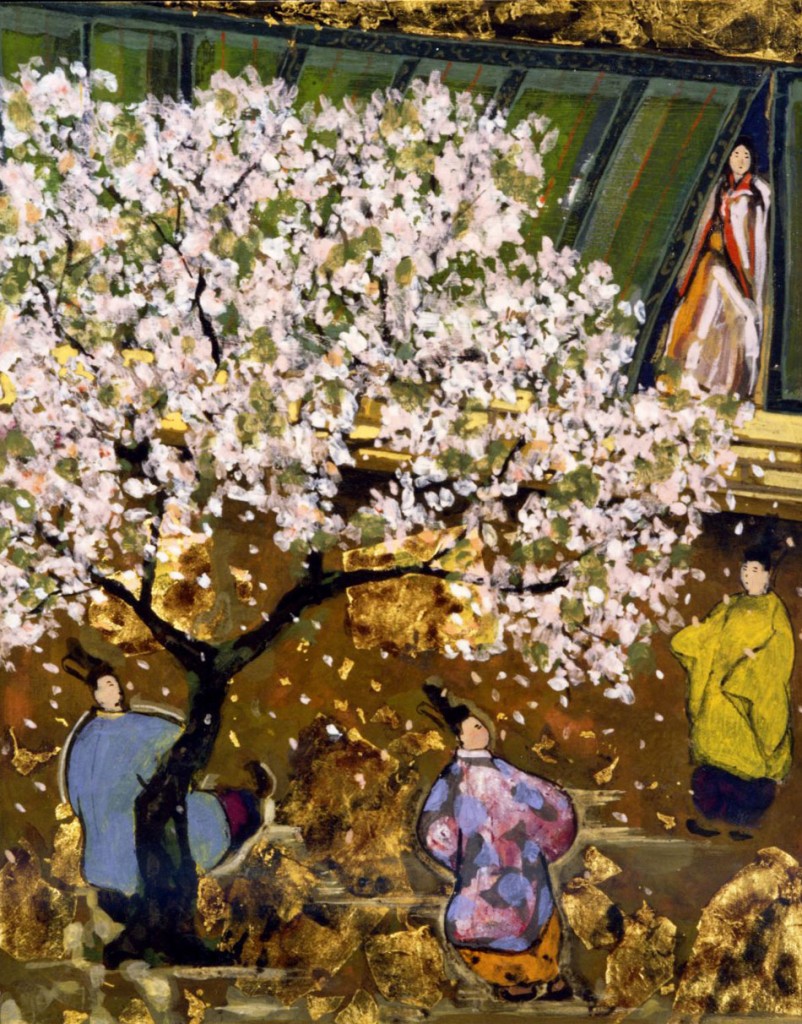 Chapter “Wakana” is the biggest climax of “Tale of Genji “.

Very short moment when Chainese cat open the certain, but enough time to fall in love.

Kashiwagi loves Onna-sannomiya so much, and he can’t stand any more.
And he across a border of  this forbidden love!

Kashiwagi is son of Genji’s cloth friend Touno-Cyujyo, that because complicated story.

After that,coward Kasiwagi sick ill, and he died just like a bubble disappears.

This story is most famous and many painters draw this titles. 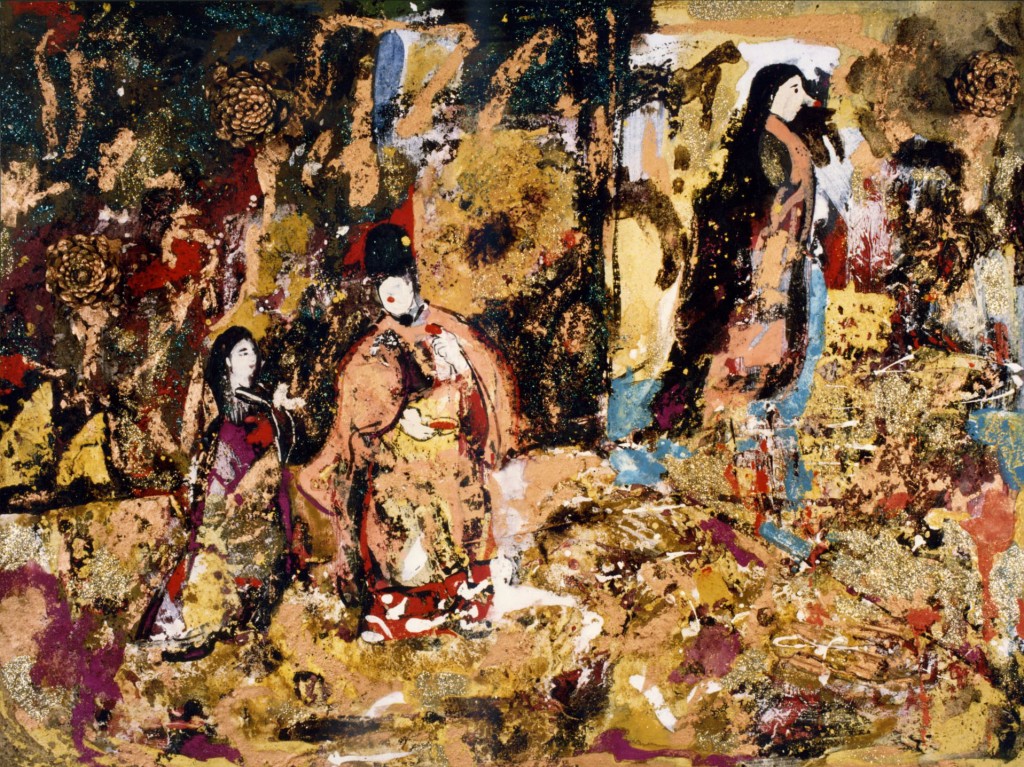 Genji make laugh Suetsumu-hana with Murasaki-noue,
they paint their nose in red. 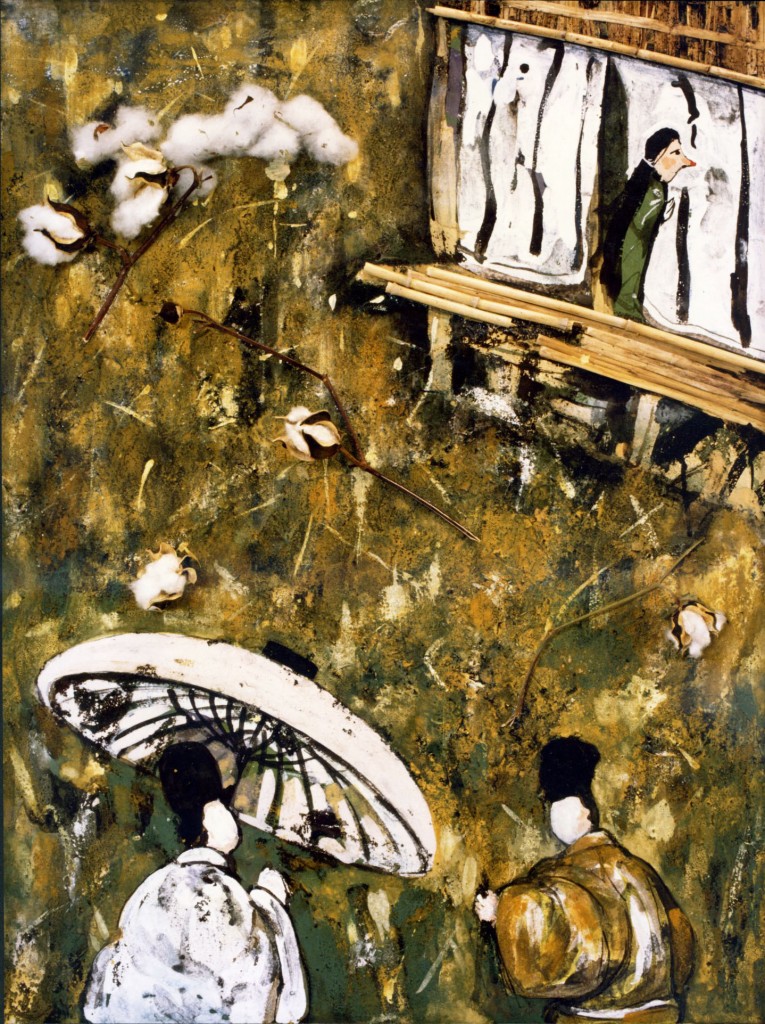 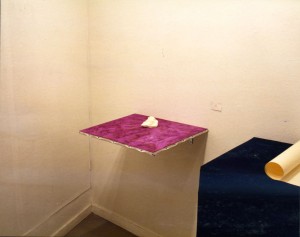 There is a legend of “The tale of Genji” has a volume
which does not have the text only in a title,
it is symbolized Hikaru Genji was pass away.

This is the solid work it meaning of. 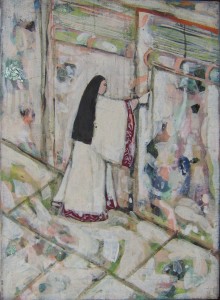 It is a portion which is not not much related to a right course. 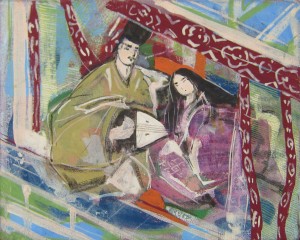 They say the woman most loved by Genji is Murasaki-noue.
But actually she is the most unfortunate woman in the story. 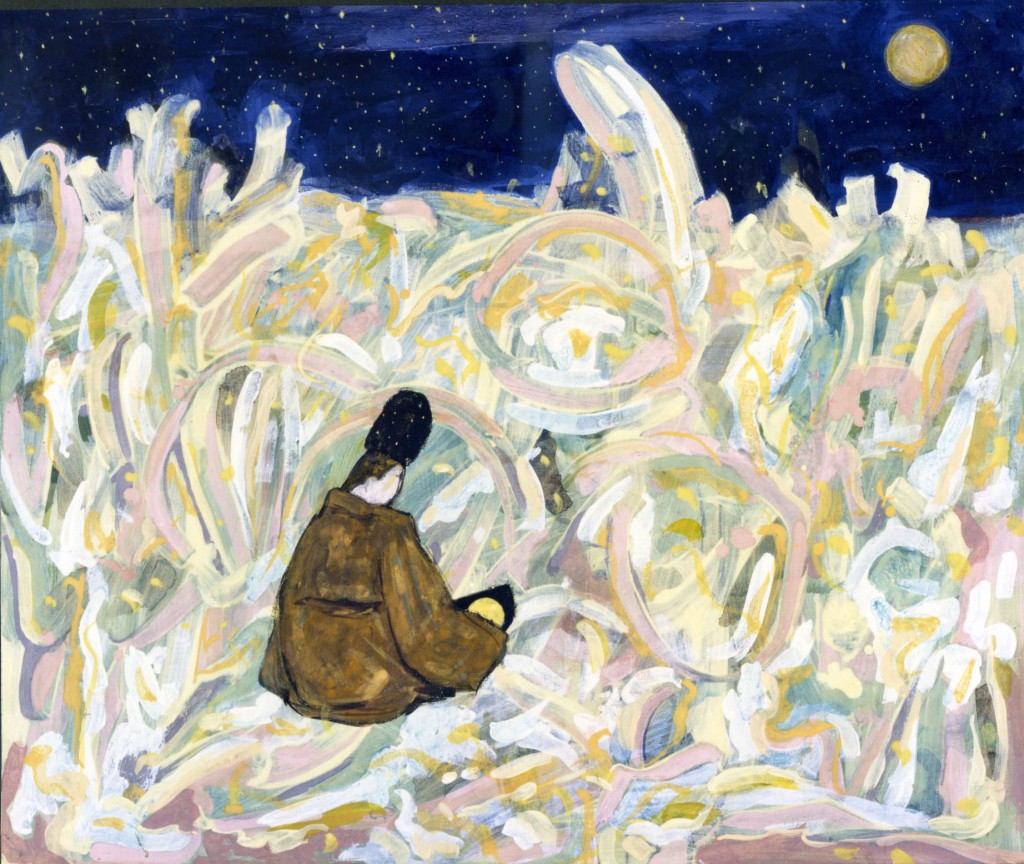 Murasaki-noue is beautiful and intelligent and type of offer to men,
so she has a lot of men’s funs.

But in this story, such a woman was written most unhappy.
Off cause Genji loves her very much,
but why he loves Murasaki because she looks like Kiritubo-no-kimi
who is like as two peas Genji’s mother.

What a sad woman Murasaki-noue!

But Genji truly loves Murasaki ,
when she died until Genji is still alining, he became just like cast skin of  cicada.

Characters with the Tale of Genji main in fact   It is wholly unhappy. 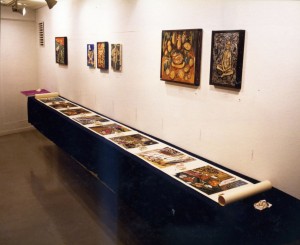 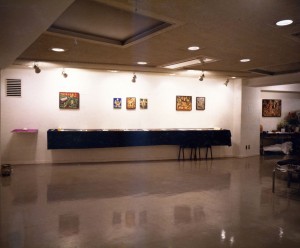 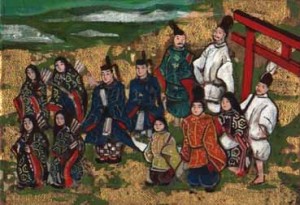 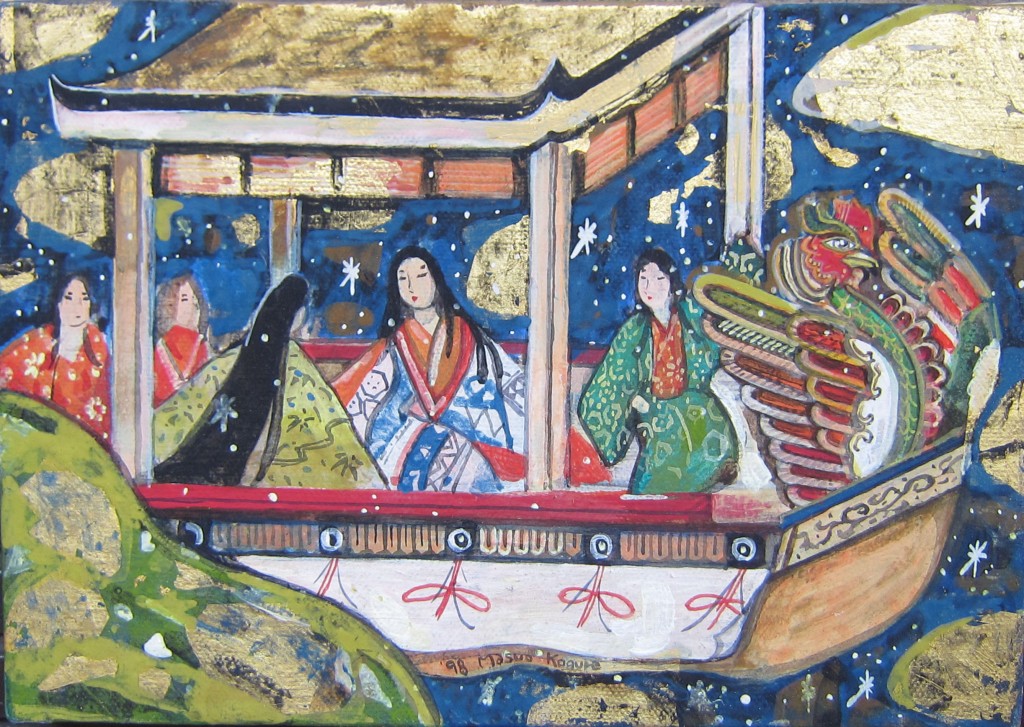 It is the gayest scene also in “The tale of Genji”.
Genji promoted to next position of the emperor,
and he reconciled to Touno-cyujyou.

It is finale of the part1. 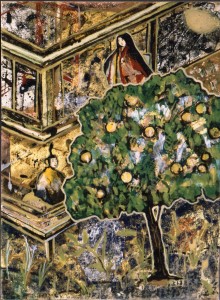 This is quiet chapter before Genji go to Suma and Akasi. 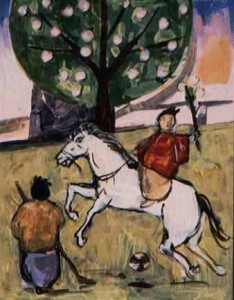 This picture is not from ”The tale of Genji”.
It from “The pillow book” by Seisyo-Ngon.
In Heian period 1000 years ago,
there is a game play just like Poro.
Poro’s  roots is from Tibetian game,it is from same place.
I guess that both are same roots,
but in Japan there is no game like that.
The pillow book / Bet in snow height 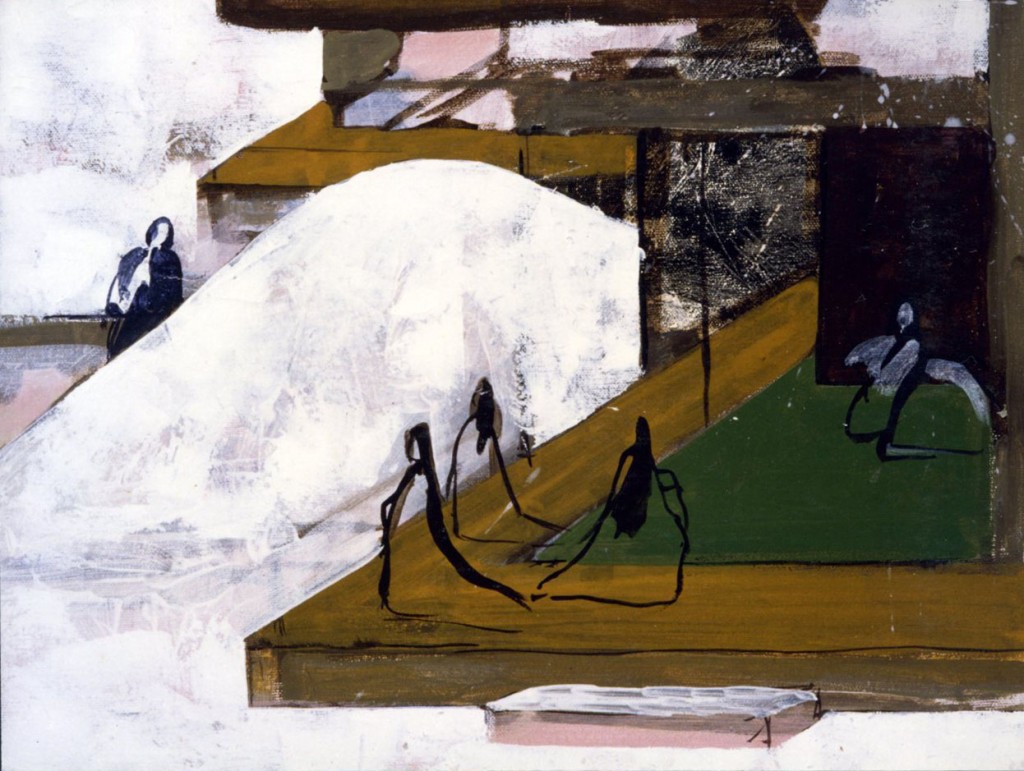